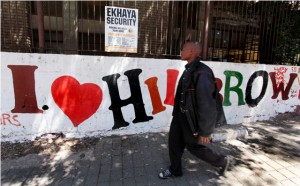 Mpe Phaswane’s Welcome to our Hillbrow was published in 2001 and in the book, the author gives a detailed description of life in the community of Hillbrow. He describes the hardships experienced by its inhabitants. However, Let us first backtrack and speak of what Hillbrow used to be and what has changed in the Hillbrow of today.

During the apartheid era in South Africa, Hillbrow was a designated ‘whites only’ area. Soon after, it become a ‘grey area’ where whites and blacks lived together. It was thought of as a very progressive and cosmopolitan neighbourhood as it was one of the first neighbourhoods in South Africa to be identified as accepting to gay and lesbian couples. However the development of this neighbourhood soon made a turn for the worst. Due to a lack of infrastructural planning and a lack of investment, the population of Hillborw grew faster than the neighbourhood could develop. The middle class residents left the community and thus led to the further decay of the community. Today, most of the residents of Hillbrow live in abject poverty. It is known for its high population density (69,000/sq. km), unemployment, poverty and crime.

This is a link to a documentary created by filmmaker Cifford Bestall created in 2012. It takes the viewer on a personal journey through Hillbrow and tells the stories of some of its residents.

The Hillbrow Mpe describes is the Hillbrow that exists today. Perhaps part of the problem that Hillbrow experienced was that there were too many people from different walks of life that just never became one community. In the book, the author describes how the outsiders were treated by the Hillbrowians. However, no one really knew who the original Hillbrowians were. Who were the first to live in this neighbourhood and where are they now? Why hasn’t the South African government done anything to restore Hillbrow to its former glory?