According to the Urban Dictionary definition, adolescence is: “The most supreme torture in a form that most humans can understand.” Indeed, Charles Burns seems to agree with this definition, as he uses the disease in Black Hole as a metaphor for adolescence. The novel focuses predominantly on teenage characters who all deal with different symptoms of “the bug” and likewise, struggle with different aspects of adolescence. 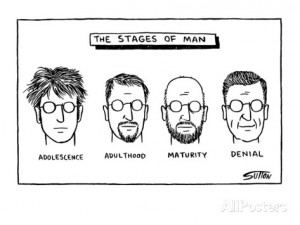 Below is a list of the symptoms that each character develops from “the bug” (and my interpretation of what symptom of adolescence it represents):

As we all know, there’s more to adolescence than just the physical changes. It is a tumultuous transitional period between childhood and adulthood, where one is old enough to know better yet young enough to still do something (reckless/bad) anyways. Often, teenagers find themselves disengaged from their parents, families, teachers, and sometimes even society itself, which gives rise to our class discussion on the adolescent obsession with vampires, as both teenagers and vampires feel shunned and misunderstood by their peers.

Here is an article outlining many “symptoms” and aspects of adolescence, as well as providing “survival tips” to parents on how to deal with their teenagers.

Much like infected individuals, adolescents endure huge transformations and pain as they grow and learn what it means to belong within society as a responsible, knowledgeable adult. Along the way, there are numerous symptoms of this painful process, but once an individual survives the “disease” of adolescence, he/she is better prepared to face “the real world.” Adolescence teaches strength and patience. In essence, quoting Kelly Clarkson, “What doesn’t kill you makes you stronger.”

P.S. Here’s a short film adaptation of the novel that encapsulates the essence of adolescence, as portrayed in Black Hole. Enjoy!

← Androgyny in the 70s
The Zombies, Ourselves →