The story of Arthur Mervyn (1799) by Charles Brockden Brown was based on the yellow fever epidemic that had struck Philadelphia, then the capital of America, in 1793. The novel’s prominent themes include sacrifice, loyalty and determination. As is evident below, these themes are interlinked and are essential forces that drive the characters and the novel.

Sacrifice is a theme which we have encountered before in Defoe’s reading and will be re-exploring them in Arthur Mervyn. In Defoe’s novel, A Journal of the Plague Year (1722), we saw sacrifice of family and values for the ‘sake of survival.’ Sacrifice does reemerge in Arthur Mervyn but in totally different forms which will be explained later. Sacrifice is an evident and recurring theme in both Volume I and II of Arthur Mervyn. This not only includes sacrificing one’s health and wellbeing, but also one’s reputation. Relating sacrifice back to our previous readings, it is apparent how H.F., in Defoe’s novel, sacrifices his health by staying in London. In Arthur Mervyn, Dr. Stevens sacrifices his health and the health of his family by bringing Mervyn into their home. Moreover, Mervyn also sacrifices his well-being for the sake of finding Wallace, Susan Hadwin’s love interest, by going to the city.

Sacrifice in Volume II, on the other hand, is about risking one’s safety and reputation. That is, the risk of getting hurt and shot (e.g. by Philip Hadwin when he was mad that Mervyn was “involved” in the burning of his brother’s will; by the woman whom Clemenza Lodi was staying with who shot Mervyn; by Welbeck when he found out that Mervyn had told Dr. Stevens all about his life) and the risk of suspicion and going to prison. For instance, one encounter we would like to highlight is when Mervyn was determined to visit Welbeck at his apartment, Dr. Stevens expressed his concerns for Mervyn and his reputation by saying:

“There are other embarrassments and dangers of which you are not aware. Welbeck is pursued by many persons whom he has defrauded of large sums. By three persons you aredeemed an accomplice in his guilt, and a warrant is already in the hands of officers for arresting you wherever you are found…You lived with him. You fled with him. You aided and connived at his escape…they subject you to suspicion” (Brown, 259-260).

However, Mervyn assures him and says “I have nothing to fear” after he and Dr. Stevens deduced that these are not really “crimes” and it will not “expose [him] to punishment” (Brown, 260). Furthermore, Mervyn also says that imprisonment and obloquy “cannot be avoided but my exile and skulking out of sight…I shall, therefore, not avoid them. The sooner my conduct is subjected to scrutiny, the better” (Brown, 260). Why does Mervyn risk his safety and reputation for the sake of doing what’s deemed just? Was it to avoid guilt? Was it because he has seen what it can do to people (i.e. Welbeck)? Another question worth considering would be: Why do you think he was able to get away with some of his actions that seemed suspicious? Was it because of his charismatic personality?

In Volume I, we have seen how Mervyn keeps his promises of not uttering a word about his encounters with the people he meets as per their request to remain silent. For instance, when Wortley questions Mervyn about Welbeck, Mervyn says that he promised not to say anything:

“I questioned him as to the fate of that man. To own the truth, I expected some well-digested lie; but he merely said that he had promised secrecy on that subject, and must therefore be excused from giving me any information. I asked him if he knew that his master, or accomplice, or whatever was his relation to him, absconded in my debt? He answered that he knew it well; but still pleaded a promise of inviolable secrecy as to his hiding-place.” (Brown, 12)

Despite the conflicts and betrayals Mervyn was put through by those people, he maintained his loyalty to them as much as he can. One would think why does Mervyn remain quiet given his unjust treatment by them? This question relates to past years’ discussions on the theme of altruism in Arthur Mervyn and the question of what drives people to help others voluntarily. There must be countless explanations for such actions but thinking about Mervyn himself, can we say that his confidentiality towards others is a form of altruism? Could he be protecting his confidants by keeping quiet? Did Mervyn fear the failure of fulfilling his responsibilities towards those who trusted him for their safety and secrecy? Overall, we see Mervyn’s persistence in withholding vital information even in the face of all the deceptions he runs into.

In Volume II, we learn about Mervyn’s strong determination and willingness to help Eliza Hadwin and Clemenza Lodi after his recovery. The way in which the story unfolds in this part is driven by Mervyn’s perseverance to fulfill the responsibilities he felt were put upon him. Finding Clemenza Lodi and ensuring her well-being was not necessarily Mervyn’s responsibility but he insisted on helping her because he felt that it was his duty to do so. If we are to explore this situation closely we would be able to see the intertwining of loyalty and perseverance. This tells us another thing about Mervyn; his sympathetic character also motivates his decisions and we find that he shows compassion for everyone, even strangers. Towards the end of the novel Mervyn expresses:

From this we learn that Mervyn realizes that not everyone deserves his loyalty and kindness but he gives it to them anyway. What’s different about this part of the story is that we see Mervyn open his eyes to reality and admit that he had to deal with people who tricked him but he stayed true to himself.

One thing to note, which will not be explored deeply in the post due to length constraints, is the narrative structure of the story because Brown starts his narrative not from the beginning of the text, as in Defoe, but further into the story. Getting the readers more involved in the story by going through the thought process of various characters at different times will have a different effect than simply directing the readers chronologically through the story. One effect is that starting from the middle of the story and having it slowly unfold will create more suspense and the readers will be able to match up the events and actions of people (as it will then start to make more sense to them), similar to a mystery story.

Overall, it is evident how sacrifice, determination and loyalty are recurring themes in Volume I and II of Arthur Mervyn and are what drive the characters and the novel. These themes are important to focus on particularly because Mervyn does possess these qualities especially in times of desperation. It is essential that Brown drives our attention to the noble side of people because even in the worst circumstances, some of them can act nobly which restores faith in humanity. 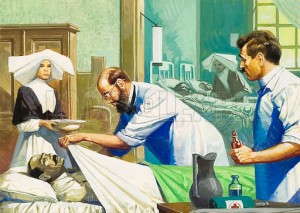 ← Every day is like Sunday
Frenchmen, Haitian Slaves and War! Oh My! →