Throughout the novel we have seen how the people of Newark, including Bucky and the children, keep questioning the cause of the polio disease and how it spreads. Out of fear and distress, parents started to suspect everything and some would lock themselves in their houses along with their children to minimize contact and thus prevent any chance of infection. The government and the Board of Health continuously urged the people to disinfect their surroundings and to clean themselves every time they get into contact with something doubtful. People blamed the heat of the summer, the stuffy atmosphere of the city, alley cats, lost dogs and pigeons, mosquitoes and flies (the “Swat the Fly” campaign), the transference of money and later when Alan Michaels dies even hotdogs were believed to be the source of the contagion.

What the people did not really suspect, however, was the possibility that the virus spread through water or at least it was not explicitly stated in the novel that people avoided contact with any water areas and/or public water supply. Poliovirus is known to be very contagious. It spreads through contact with the excrements of an infected person and less commonly from droplets from a sneeze or cough. If you get any of such bodily wastes from an infected person on your hands and you touch your mouth, you can get infected. The virus may live in an infected person’s body and then their feces for many weeks even when that person does not show any symptoms of the disease. Therefore, if that person is not extra careful with cleaning themselves after exhausting they can contaminate food and water or basically anything they touch. This means that water is a substantial carrier of the virus because everyone uses water to clean themselves of stool and dirt and some might use public space water to do that, which ultimately makes water a prominent source of the contagion.

A short while through the book, Bucky starts to blame himself and then God for the spread of the disease thinking that his decision to maintain the playground in business has played an important part in circulating polio among the boys of the neighborhood. What Bucky did not know was that the main source of the virus comes from excrements and therefore has nothing to do with the boys playing in the playground. However, in an important scene at the playground we first see the connection between polio and its medically correct carrier. It is the scene when Kenny loses his rage at Horace, the “moron” of the neighborhood, blaming him for spreading the disease: “He’s got shit all over his underwear! He’s got shit all over his hands! He doesn’t wash and he isn’t clean, and then he wants us to take his hand, and shake his and that’s how he’s spreading polio!” (119) At this point in the novel, this seemed to be the most realistic and convincing source of the virus (at least for me) and what Kenny was afraid of was really the true cause of polio that others did not see. Interestingly enough, later in the scene the narrator describes Horace as “the human blight” which means the human disease, one that ruins and damages something and in this case the health of those who surround that person.

At the very beginning of the novel, the narrator tells us that those who stayed in the city lived their life normally and the “overexerted” boys ran “all day in the extreme heat” and drank “thirstily from the forbidden water fountain.” The water fountain was forbidden which could imply that the Board of Health was cautious with water along with the other precautions but apparently the people did not take it seriously. In addition, ironically, Bucky becomes the new waterfront director at Indian Hill when he leaves the playground, which means that he started to play water sports with the boys in the camp.

In our discussion today we asked the question of whether Bucky is somewhat guilty in spreading the disease or not. However, given his compassion with the boys in the playground and his carefulness with cleaning how could he be the one to blame? Is it because he came into close contact with the Italians at the playground the other day, which forced the boys as well to be around their infected saliva? Or is it because he shook Horace’s dirty hands when Kenny was accusing him of spreading polio? Could it also be because he moved to Indian Hill to be a waterfront director and so he moved the “polio germ” into the waters of the camp?

Also, below is an interesting photo of a real Bucky (in a playground) who was actually a football coach in Newark and a discussion of the possibility that Roth’s Bucky was not a fictitious character can be found in a previous post, here. 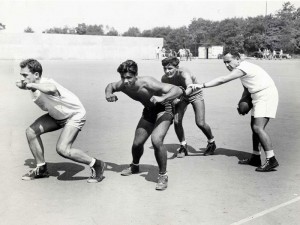