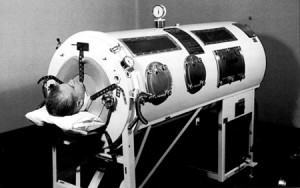 In Roth’s Nemesis (2010), we have come across the term “iron lungs” which some of the characters in the novel had to use when they contracted polio. It has been stated that there is no other device more associated with polio than an iron lung, or a tank respirator. Physicians that treated people who were at the early stages of polio found that they had trouble breathing because the virus paralyzed the muscle groups in their chest. At this stage, death is frequent. Although, those who survived recovered almost all of their strength.

What powered the iron lung was an electric motor with two vacuum cleaners. The pump would change the pressure inside the “rectangular, airtight metal box” which would pull air in and out of the lungs. Breathing on one’s own usually happened one or two weeks later.

Nothing worked well in trying to help people breath until Philip Drinker and Louis Agassiz Shaw at Harvard University, in 1927, invented a version of an iron lung that helped to maintain respiration artificially until the person could breathe independently. An inventor called John Emerson later refined the device where a patient would lay on a bed (called a “cookie tray”) and could slide in and out of the cylinder when needed. The tank also had windows so that attendants can reach and adjust sheets, limbs etc. Emerson tested it by spending the night in it and it was first used in Rhode Island to save the life of a priest who had polio.

Mass distribution of iron lungs happened in 1939. In the 1930s, an iron lung cost around $1,500 which was the average price of a home. During this time, Drinker took Emerson to court and said that he “had infringed on patent rights by altering [his] iron lung design.” However, “Emerson defended himself by making the case that such lifesaving devices should be freely available to all.” In 1959, there were 1,200 patients using tank respirators in the United States, but in 2004, there were only 39 due to the polio vaccine.

Hope you enjoyed these facts!

← Politics of Contagion
Is Bucky Guilty? →