Well, today may have been the first time I was ever tempted in class to link Ibsen to Suicidal Tendencies, but the passage we focused on from Ghosts — all kinds of old defunct theories, all sorts of old defunct beliefs, and things like that. It’s not that they actually live on in us; they are simply lodged there, and we cannot get rid of them — made me think of the above song, which was released in 1983. They key connection comes when the singer asks how he could be considered crazy if he’s simply a product of his parents’ various institutions. As noted in discussion, Ibsen’s take on cultural inheritance is pretty bleak. Might we even say it’s punk?

Here are some links to past discussions of Ibsen on this site. Last year someone posted a clip from a recent theater production in London. Here’s a post that reads syphilis itself as the play’s creepiest ghost and another on 19th-century Norwegian beliefs about ghosts and haunting — with a surprising dip into the history of photography. Here’s one on Romanian takes on the undead. 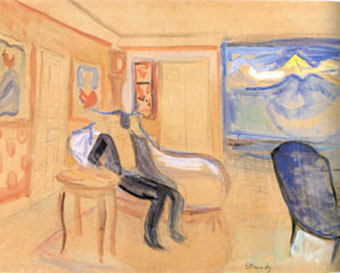 I think I mentioned in class that Edvard Munch, the Norwegian painter, was a big Ibsen fan. Ibsen was 30-odd years older than Munch and they only met a few times. But Munch was pretty taken with him. Here’s a brief essay on the relationship between their work, including comments on Munch’s 1906 set designs for Ghosts (see above, Oswald sitting in the chair in the final scene, the sun rising outside as visible through the big picture window). I like this observation in particular:

To see was the most important thing for both Ibsen and Munch – but certainly not in an external, photographically recording sense. The artist’s ability and task is to see inwards – so that external motifs and inner, mental agitation are “lived through” (to use one of Ibsen’s favourite expressions) and melted together into valid expression. I do not paint what I see, but what I have seen, Munch once said – and Ibsen could have said the same about his “poetic visions”.

And here are a couple links to even earlier posts: the first conveners’ post from 2012; one on humor (how much of this play should we read as comedy?); and one on fatherhood — especially bad fathers — as one of Ibsen’s particular obsessions. Enjoy!