The following has been taken from an article posted in The Economist: 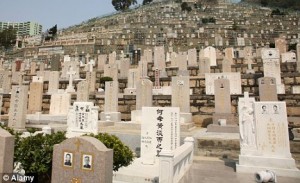 “IN RURAL China, the afterlife is a serious matter. After more than 60 years of Communist Party rule, the festival of Qingming or “tomb-sweeping day”, celebrated on the fifteenth day after spring equinox (April 4th this year), is enjoying a revival. Though suppressed during the Cultural Revolution, the festival was reinstated as a public holiday in 2008. An important part of traditional filial duty is to honour the souls of the departed, and Qingming is the day to tend to a deceased relative’s grave. It is also peak season for “ghost marriages”, and the time of year when bodysnatching proves most lucrative.”

(On the right is a picture I extracted from this article) If you look closely at some of the tombs, there are pictures of couples that were wedded after their death.

“Ghost marriage (minghun) is a 3,000 year-old custom practiced especially in northern China. Huang Jichun, a scholar at Shanghai University who studies Chinese folk traditions, says the majority of rural families in the north, whose relatives die unbetrothed , seek “ghost spouses” for the departed. According to custom, the bodies are buried together in a ceremony that is a cross between a wedding and a funeral. Their ghosts, it is believed, will then no longer be lonely, and the family’s fortunes will be restored.

In Guangping county of Hebei province in February of this year, an 18-year-old man surnamed Liu, who died of heart disease, was joined in a ghost marriage with a 17-year-old woman named Wu, who died of a brain tumour. The Liu clan paid 35,000 yuan ($5,600) for the body of Ms Wu, a hefty sum for a farming family in Hebei where the average income per person is around 5,000 yuan per year. Having never met in life, the two were buried together in death, and dumplings were scattered on their grave. Their honeymoon was cut short soon after, however, when grave robbers snatched Ms Wu’s body, reselling her into another ghost marriage in a neighbouring province.

“I hope the robbers get the death sentence or 20 years in prison,” says Ms Liu, the mother of the deceased young man, standing on her mud doorstep in a grey padded jacket and red slippers. Four generations of the Liu clan live in the squat redbrick building behind her. Stagnant rainwater sits in the mud streets outside. Old people push bicycles laden with empty beer bottles for recycling.

Trade in female corpses is flourishing in these poor rural areas. Bodies are typically procured through brokers, with the typical quoted price of a fresh corpse rising at least 25% in the past five years to 50,000 yuan. A Chinese newspaper last year blamed rich coal mine bosses for driving the cost of a female corpse as high as 130,000 yuan. In 2010, a bodysnatching ring was broken up in Hebei province. Its members had robbed dozens of graves in the region, earning hundreds of thousands of yuan.

Ghost marriages have long been shrouded in controversy. A record in the Zhouli, an ancient Confucian text dated from the 2nd century BC, forbids the custom, but there are records of the imperial family conducting ghost marriages in the Tang (618-907AD) and Song (960-1279AD) dynasties. Under Chairman Mao the custom was labelled superstitious and banned outright.

But Mr Huang, the scholar, believes the recent upswing in ghost marriages is in part due to China’s economic boom. Rural families are now better able to afford the steep price of a corpse bride and, says Mr Huang, the resurgent trade in bodysnatching has brought a reliable supply of fresh corpses that has spurred consumer demand.

The Liu family is hoping to lay its ghosts to rest. After arresting four of the five grave robbers, police finally returned Ms Wu’s body to their son, her original ghost husband. Not trusting the geomancy, or fengshui, of the couple’s original tomb, the Lius built a new one reinforced with concrete. Alongside the food offerings, they carefully planted a traditional baifan–a rod wrapped in white crepe to help guide the ghost couple to paradise. This year, at Qingming, they will visit the couple’s tomb, burn incense and place dumplings. Tragedy struck them in this life. Perhaps, finally, it will leave their loved ones alone in the next.”

I also found in another article that when bodies ran short, some created corpses for ghost marriages. 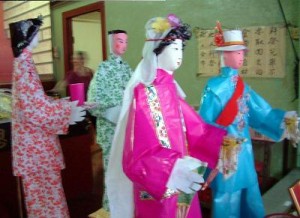