During our last meeting we began to address the generic differences between the works by Sophocles, Thucydides, and Boccaccio, especially the differences between theater and novella (though we should think about the difference between history and either of the other genres too). All three genres involve storytelling of sorts, but it will benefit us to think about how those stories were designed to circulate and why. What characterizes each genre when it comes to telling its particular story or set of stories? 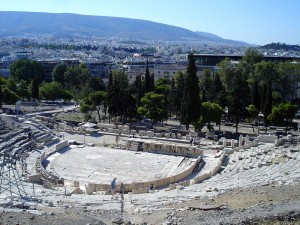 If you read the introductory material to Oedipus or poked around a little on the web, you’ve probably started to get a sense of how Athenian theater worked. For one thing, it anticipated its audience members were citizens who would be involved in direct deliberation of public policy. (What role does deliberation play in this tragedy?) Greek theater developed at the same moment as political democracy, philosophical thought, classical architecture. There’s an emphasis in the play — and in the very dramatic form — on civic life: theater is central to political culture. A Greek theater could seat 14-15K spectators. (The ruins of the Theater of Dionysus are shown at the left.) Playwrights wrote for contests that coincided with religious festivals. The chorus was a theatrical innovation that incorporated older forms of song and dance into the theater. One of Sophocles’ chief innovations as a playwright was the move beyond two actors, making the relationship among characters the thing that drives the play, and making the chorus recede into role of commentators who to some degree perform as surrogates of the audience. With this in mind, note how the chorus seems to go back and forth in this play as more and more evidence is presented. Where do they ultimately fall?

How does the literary landscape shift by the time we get to Boccaccio? The Decameron is about storytelling, and the effects of storytelling, to be sure, but it’s also about reading stories about storytelling. Its immediate concerns are the effects of storytelling (the brigata retreats to the countryside in order to provide therapeutic conversation for one another) but those oral performances are represented in print, in short episodes or novellas, a collection of stories that almost resemble what would become the novel. Note that Boccaccio directly addresses a female reading public at the outset and imagines women reading as they spend time in relative confinement. This invocation — and the predominance of female characters — will give us a good inroad to discuss the role of gender and gendered bodies in the selections you’ve read and will continue to read this semester.

What all these works share, however, is a knowledge that their immediate audiences would have an intimate familiarity with plague. Sophocles’ plague at Thebes reminds audiences of the plague in Athens. Boccaccio’s readers, like his characters — and like Thucydides — would also have been plague survivors. What impact do you imagine that immediate experience would have had on the first audiences to encounter these works?

On the topic of therapeutic reading, see the earlier Convener’s Post on The Decameron.

Image above via Wikipedia Commons.

← A Plague at Thebes
Bring out your dead! →