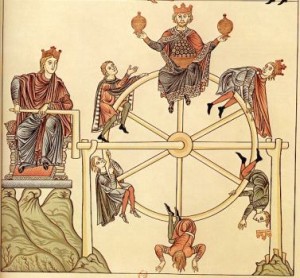 Thinking about our discussion of Fortune today, both as it informs The Decameron and butts heads with Protestant reformers later on, I was reminded of this piece by the cultural historian Jackson Lears about the concept’s history (especially in Western thought). A few relevant excerpts:

In ancient Rome, Fortuna began as a fertility goddess but soon came to embody prosperity in general, as well as a basic principle of potentiality. She merged with the older Greek divinity Tyche, whose devotee Palamedes, the mortal grandson of Poseidon, supposedly invented dice and dedicated the first pair, made from the ankle bones of hoofed animals, to her. The iconography of Fortuna linked her with emblems of abundance but also with uncertainty and ceaseless change: she carried a cornucopia of fruits and vegetables yet stood on a ball or turned a wheel that rotated her beneficiaries. “Changeable Fortune wanders abroad with aimless steps, abiding firm in no place; now she beams with joy, now she puts on a harsh mien, steadfast in her own fickleness,” Ovid wrote in his Tristia, after he had been forced into exile. “I, too, had my day, but that day was fleeting; my fire was but a straw, and short-lived.”

But Fortune did not fit well with Christian ideas of Providence. To early Christians, the divine plan unfolded as mysteriously as the fluctuations of luck, but however remote the planner or apparently perverse his decrees, his purpose was ultimately benign. Boethius, unjustly imprisoned in the sixth century after a distinguished public service career, endorsed this idea in the Consolation of Philosophy. “Well, here am I, stripped of my possessions and honors, my reputation ruined, punished because I tried to do good.… Why should uncertain Fortune control our lives?” Lady Philosophy appeared in Boethius’s story to explain that behind the apparent caprices of Fortune, divine Providence governs all things with “the rudder of goodness.” Chance was “an empty word,” Lady Philosophy said. After all, “what room can there be for random events since God keeps all things in order?”

This was the traditional Christian argument that would be repeated for centuries.

It’s worth paying attention to how language of fate, chance, and Providence work their way into Defoe’s narrative. What was the relationship between Fortuna and storytelling in The Decameron? What does it seem to be in this text?

← Defoe round-up
Defoe as novelist, novels as something new →