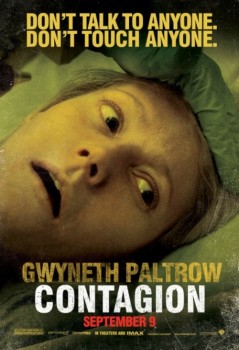 Hi, guys. It’s been a real pleasure to make our way through this semester together. While we were watching Contagion I was reminded of these two posts from last semester that commented on the film and the science behind it. In a comment on the first of those posts, I made a few observations and asked a couple questions the movie raises for me:

I’ve seen the film now four or five times and I’m still trying to sort through the logic of the final scenes. On the one hand, it would seem that global capitalism has rendered us more vulnerable than ever: both in terms of how food is produced and shipped and in terms of global air traffic potentially spreading a virus between major global cities. That seems to be the point of tracing the spread from the bats (dislodged by developers) to the pigs to the hotel chef to Gwyneth, the swanky casino/hotel patron. (Also, is there some suggestion that she may have deserved the infection due to her infidelity? Or perhaps her gambling?) This chain of transmission — from food prep to credit cards — seems to send the notion that every touch, every transaction is potentially deadly. But Laurence Fishburne’s little speech at the end to the janitor’s son about the history of the handshake ritual (Nemesis, anyone?) seems to suggest that the film doesn’t want us to abandon such demonstrations of our non-threatening human exchanges. Is it just that we need to keep washing our hands between handshakes?

A friend of mine, Caleb Crain, wrote about Contagion for The Paris Review back when the film was first released. Note the cameo appearances in his review by Defoe, Camus, and none other than Arthur Mervyn! Caleb’s more extended reading of Arthur Mervyn can be found in his book American Sympathy. But I thought you’d appreciate some of his connections:

Contagion has been praised by science journalist Carl Zimmer for its realism—for showing such details as the sequencing of the fictional MEV-1 virus’s genetic material in order to trace its phylogeny. But how did Soderbergh keep his plague from becoming too real? I’d say it’s by limiting moral ugliness to the villains—to nameless looters in masks and to Jude Law, who plays a scurrilous blogger, branded with a crooked front tooth by the make-up department, for ease of identification as a pariah. When I was a teenager, I read La Peste, Albert Camus’s fictional account of an outbreak of bubonic plague in an Algerian town, because I was entranced by the moral certainty of the hero, a doctor who never seemed to factor the risk to himself into his decisions. How noble!, I thought. Years later, as a young adult, my sexual awakening took place in the shadow of a plague that, in those days before triple-combination drug treatments, killed within ten years almost everyone who contracted it. (Soderbergh’s MEV-1 only kills one out of four of its victims.) In the shadow of AIDS, Camus-like moral certainties turned out to be hard to find; all the gay men I knew worried about risks to themselves. Not worrying about such risks seemed to constitute a moral failing; on the other hand, surviving, too, seemed a somewhat guilty endeavor. In graduate school at the time, I found myself reading and rereading one of America’s first Gothic novels, Arthur Mervyn by Charles Brockden Brown, set during the yellow fever epidemic of 1797. The book’s paranoid mood and untrustworthy hero seemed timely. Moralizing was ubiquitous but unhelpful; virtue and villainy seemed mixed up in oneself.

How does Soderbergh play around with the major tropes we’ve discussed all semester? (Think of the play on communication — words — and communication — of disease, in the movie poster above, or the role played in the film by governments in containing information or establishing quarantine or seeking cures.) You can read the rest of Crain’s thoughts here. But I wonder if you’ve got some answers of your own after 14 weeks of thinking about these issues.