Perestroika was a political movement for reformation within the Communist Party of the Soviet Union during 1980s, which brought on the ascendancy of Western liberal democracy through the democratization of the Kremlin under the leadership of Mikhail Gorbachev, thus marking the end of the Cold War and a solving to the conflict between capitalism and communism. These major political changes coincided, in America, with the emergence of the AIDS epidemic, which killed over one hundred thousand people during the same decade creating among the population of the USA a strong revulsion against homosexuals, who were considered to be carriers of the disease.

In the second part of his play, Tony Kushner wants to create an image of the political, historical and ideological consequences that this AIDS contagion had and the way the promised USA democracy (which should have shown its power after the falling of the Berlin’s wall) wasn’t able to stand against it. Perestroika begins with Aleksii Antedilluvanovich’s speech, who asks a series of questions which could be read as a prelude for the action of the play, anticipating the major ideologically problems USA will confront with (even if they are spoken by a Russian, they are meaningful for America as the disappearance of USSR could be viewed as a menace for USA that any “empire” could fall):

Aleksii writes out a significant portion of the convener’s post for us at the very start of the play where he begins with these wide arching questions. His ruminations next land upon cheeseburgers and market incentives which he claims have replaced theory in the world. However, as understood by him, cheeseburgers and market incentives fail at replacing the purpose of theory which was (arguably) to make better sense of the world we live in. Later in the story this can be compared to placebos as replacements for medicine.

The replacement can be identified as a change and to overcome this change, requires more change. Returning to the previous conveners’ analogy, the cure for motion sickness is more motion. Thus we as readers (and perhaps even the other characters of the play) are asked,

“Have you, my little serpents, a new skin?” 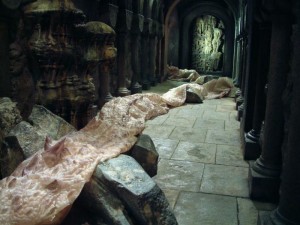 How aware are the different characters about the issues presented at the start at different occasions in the play?

The context contained in the title of Part II ‘Perestroika’ (as explained above) itself is a wide arching exposition to situate the events in the play. The train of thought that starts after reading the title ‘Perestroika’ is interrupted by reading the title of the first act ‘Spooj’. In a similar way, the serious and moderately urgent questions of Aleksii are followed by Harper ejaculating her ideas. In a sense, the play is giving us a behind-the-scenes thumbs-up on the effect of big concepts on little people’s lives, playing with the theme that perhaps the seriousness of issues have more quirks when lived at a personal level than when navigated as an overarching whole. It may not necessarily mean that the issue becomes less serious but its manifestations emerge differently.

How can this be compared to our understanding of heroism and Camus’ attempt at correcting it?

At least two people have outstanding imagination in the play – Harper and Prior. Prior’s imagination materializes in the form of an angel. Harper meanwhile can find Antartica in her backyard and metamorphose as a beaver to pull trees down.

Remembering that they were previously husband and wife, can the hallucinations be a way for them to continue to remain in sink? How do hallucinations affect them differently?

Prior: On Angels, (insert the rest of America saying “same thing!”)… I’m an angelologist.

Mormon religion began when its founder saw an angel in his dream who directed him to the Book of Mormons.  If religion is also there to make sense of things, how do plot conflicts insinuated by religious differences affect that process?