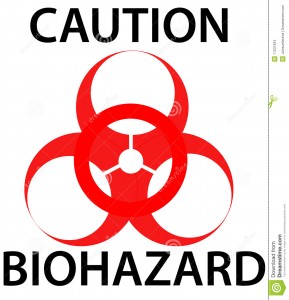 As “the terrifying true story of the origins of the ebola virus,” The Hot Zone seems to cross the border between science non-fiction and horror fiction. One way Preston achieves the horrifying effect is by creating a sense of imminent danger, well represented by the biohazard sign and biosafety level he presents at the very beginning of the story. I had no doubt in his presentation of these laboratory jargons… until I discovered the biohazard sign in our health and wellness centre (I was like WHAT?)

Preston relates the biohazard sign with biosafety level 4, along with the caption “DO NOT ENTER WITHOUT WEARING SPACE SUIT”. The wikipedia entry of hazard symbol gives us some background information on the biohazard sign:

The article explained that over 40 symbols were drawn up by Dow artists, and all of the symbols investigated had to meet a number of criteria: “(i) striking in form in order to draw immediate attention; (ii) unique and unambiguous, in order not to be confused with symbols used for other purposes; (iii) quickly recognizable and easily recalled; (iv) easily stenciled; (v) symmetrical, in order to appear identical from all angles of approach; and (vi) acceptable to groups of varying ethnic backgrounds.” The chosen scored the best on nationwide testing for memorability.

The “striking,” “quickly recognizable” feature of the sign seems to serve the author’s purpose well. Was the sign designed to warn against extremely hazardous biomaterial that corresponds to the killer virus in this story? Then how are we supposed to explain the biohazard sign in our own health and wellness center?

According to the wikipedia entry (again), It is used in the labeling of biological materials that carry a significant health risk, including viral samples and used hypodermic needles. Fortunately, the one I saw the other day seems to indicate the disposal of needles used for vaccination. So it is indeed something that we can easily spot in daily life, not only in some confidential, extremely detrimental laboratory situations.

Then how valid is the caption with space suit? The Centers for Disease Control and Prevention publication gives us specific instructions for each biosafety level. At level 4:

Obviously there is no mentioning of the term “space suit,” and the actual laboratory clothing looks like this: 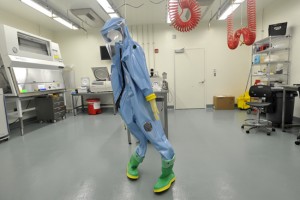 It does look pretty similar to space suit–what do you think? Nonetheless it is apparent that Preston intentionally chose to describe this laboratory clothing as a space suit. What effect does it create?

Preston’s own reinterpretation of laboratory, scientific knowledge seems to play a significant role in situating this novel between two seemingly incompatible genres. I hope the information above helps better understand how the author tackles hard scientific knowledge and reproduces it throughout the story.