The wise words of Colson Whitehead, who actually is quite funny in my opinion.
This makes me want to write my own novel.

Charles Burns combines high school lifestyle and the idea of epidemic in his graphic novel Black Hole by narrating the experiences of several teenagers. Within the context of adolescence, Burns illustrates the spreading of “The Bug”, which is transmitted through sex. Black Hole inevitably draws a parallel between sex and intoxication — whether alcohol, LSD or other soft drugs — as the usage of drugs almost consistently precedes sexual encounters. In a way we could therefore argue that the spreading of the Bug is facilitated by intoxication. 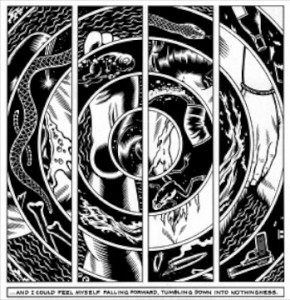 This layout on one of the very first pages seems to perfectly illustrate the statement made above. The four pillars prophesying the disease, which the hand covering genitals identifies to be of sexual nature, are juxtaposed with an alcoholic bottle, cigarettes, joint and a gun. The spiral that is created through the intercourse of all these factors is what Keith sees as ‘Nothingness’, which is also a description of the Black Hole.

The consequences that evolve out of the conceiving of “the Bug” are mutations. Chris starts shedding her skin, develops a forked tongue and repeatedly is portrayed close to water, which suggests characteristics of a snake. Eliza develops a tail, which regrows when it breaks and desires to be in the desert, which are characteristics of a lizard. Unlike those two mutations that draw similarities to animals, Rob develops a second mouth, which voices his deepest thoughts. 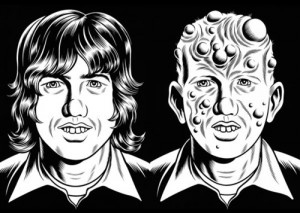 Burns’ decision to chose mutation mirrors adolescent changes in bodies, and with that makes the contagion specific to the High School environment. In addition, his choice to develop this story within a graphic novel is significant in that the effects of the contagion are of physical nature. The mutations do not necessarily change characters or behaviours, but rather the physical appearance of people. By embedding this narration within a graphic novel, Burns was able to illustrate the disease. This is very different from the other books we have read, where the disease was described with words, while here the reader is confronted with pictures, and almost no written description of the effects of the disease.

The environment around them ostracizes characters who show physical changes due to contracting the contagion. This phenomenon is a parallel to both mobbing in high school and the ostracizing of homosexuals during the AIDS epidemic. As in those instances, characters of the graphic novel try to fit in, but due to societal pressure feel more comfortable among themselves, which is why the woods become an important location for the infected students. As the Society splits into those living in the woods and those in the city, the question of whether those in the woods are still human arises. Similar to Animal’s People, it seems that those infected by the bug do no longer fully identify as human, which is underlined by the fact that many mutations have animalistic traits.

Containing this novel within the framework of a graphic novel has many effects, one being that the illustrations help the reader visualize many patterns that are not explicitly worded. This layout of Chris and Rob conversing before having sex foreshadows the exchange of the “Bug” and Chris’ infection. The merging of their faces into one is representative of this exchange and would be impossible to describe in such a creative way within a written novel. No wonder, then, that a picture is worth a thousand words.

This is a very interesting article by The Economist on the real life scandal in Eastern China, which Dream of Ding Village is based on. Seeing as the blood business is a form of economic income, who else but The Economist could report on the scandal?

He talks about The Possessed by Dostoyevsky and there is several similarities to our discussion of The Plague!