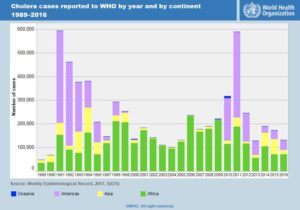 Armed with science/knowledge, are we completely safe from disease?

Irrespective of man’s knowledge of the spread of various diseases, man is still locked in a battle with diseases. Not just any disease, but viruses and bacteria that have previously occurred which means science is aware of their evolutionary path and mode of spread.
For instance, Snow paved the way for understanding vibrio cholera, the bacteria that causes cholera, and ever since, there has been massive research and a vast degree of knowledge on cholera. Yet, the disease keeps ravaging the society. Yemen in 2017, recorded 500,000 deaths caused by cholera (much more deaths compared to the London epidemic). Seeing cholera (and other disease) outbreaks in various parts of the world raises the question: are we completely safe from diseases when we have knowledge of the evolutionary pattern and mode of spread of these diseases, just as Stephen claims?

← Thinking About Anthropomorphism in The Ghost Map
Topographies of disease →