Sinha’s Animal’s People is a novel that is composed of a collection or a series of tapes recorded by a 19 year old boy, the protagonist of the novel identifies himself as an “Animal.” He does not really remember the days before the horrible incident caused by the poisonous smoke and chemical leakage in the Kampani’s factory, resulting in many diseases and death of people living in Khaufpur. One of the victims of “that night” (4) incident is the protagonist, Animal. He got the disease at the age of six. He “could not even stand up straight. Further, further, forward [he] was bent. When the smelting in [his] spine stopped the bones had twisted like a hairpin, the highest part of [him] was [his] arse” (15). Ever since then, Animal was teased and called, “‘Animal, jungle Animal!’” (16) by other kids and recognized that he was different from the normal people in appearance, differentiating himself from others and calling oneself, “Animal,” and therefore, going through an identity struggle.

Identity is one of the major themes in Sinha’s novel. From the very beginning of the novel, Animal addresses the issue of his identity: “I used to be human once. So I’m told. I don’t remember it myself, but people who knew me when I was small say I walked on two feet just like a human being” (1). In this first statement, he says “used to be,” signifying that he no longer sees himself as a human after his appearance got distorted. The fact that Animal convinces himself to be viewed as an animal is evidently portrayed in the novel, especially in the earlier part of it. He says, “I no longer want to be human” (1). The following conversation between Zafar and Animal illustrate that Animal does not really know his origin and identifies himself as “Animal:”

“Animal’s a nickname, na? I mean your born name.”

The conversation above suggests that Animal has convinced himself not to be viewed as a human. While he is a human being, he denies his human nature and calls himself “Animal.” Do you think Animal is trying to run away from reality by seeing himself as Animal? Doesn’t this remind you of Walsingham who created the feast during the plague?

Animal’s identity struggle is further explored later in the novel, during the conversation between him and Zafar and Farouq, Animal says,

Zafar and Farouq have this in common, I should cease thinking of myself as an animal and become human again. Well, maybe if I’m cured, otherwise I’ll never do it and here’s why, if I agree to be a human being, I’ll also have to agree that I’m wrong-shaped and abnormal. But let me be a quatre pattes animal, four-footed and free, then I am whole, my own proper shape, just a different kind of animal from say Jara, or a cow, or a camel.

“I’m the only on there is of this type.”

“You pretend to be an animals so you can escape the responsibility of being human,” Farouq carries on.

“And I’m an animal, why?” I retorted. “By my choice or because others name me Animal and treated me like one?”

“You’re well enough looked after now,” says Farouq. “We are your friends. … To be accepted as a human being, you must behave like one. The more human you act, the more human you’ll be.” (206-208)

Do you agree with Zafar and Farouq that Animal should see himself as a human being? What does it really mean to be a human? What is the difference between a human and an animal? What does the title of the novel, “Animal’s People,” suggest about identity and difference between men and animals? Moreover, what makes and creates one’s identity? Is identity inborn, shaped by one’s experiences, or determined by other people’s point of view? (We asked this question in FYD, remember? ;))

Other than calling himself, Animal, due to his appearance, it is significant to note that he does not know his origin. While he was given a name when he was in the orphanage, he claims that he does not remember his born name. In order to understand one’s identity, it is crucial for one to know where one originates from. This seems to be a recurring theme in many novels. Even before the conversation between Zafar and Animal, Animal talks about his origin:

On that night I was found lying in a doorway, child of a few days, wrapped in a shawl. Whose was I? Nobody knew. Mother, father, neighbours, all must have died for no living soul came to claim me, who was coughing, frothing etc. plus nearly blind, where my eyes had screwed themselves against the burning fog were white slits bleached on the eyeballs. (14)

Not knowing his parents influences Animal to undergo inner struggle. While he shows hatred toward being called a human, the inner side of him illustrates that he yearns to be a human being, creating further inner struggle. This is explicitly seen when he desires and regains hope to stand on two legs when Elli, the American doctor comes and builds a health laboratory or clinic.

Another important aspect of this novel is the languages that it is composed of. The characters of this novel all speak different languages: English, Hindi, French and in some cases we could consider the sounds of nature as a language of its own. All these languages were combined in one novel for the Eyes to read. What is the purpose of this combination? To start with, the editor explains (at the beginning of the novel) that some idioms could not be translated into English, and that is why French is used throughout the text. And, since the story is based in India then it would make sense why Hindi is used. But, what if the combination of languages has an implicit meaning? It might be that, what has happened in Khaufpur was the responsibility of global governments?  Language is also strongly linked to identity, the French nun (Ma Franci) forgot all the languages she has learned other than her mother tongue. On another note, Animal is taught different languages. He he could understand the language of nature, and is taught other languages to blend in the community. Why does the author incorporate different languages? How does language affect one’s identity?

Along with all the language spoken throughout the novel, Animal seems to hear voices. These voices that are trapped in his head do not only speak to him, but also influence his actions and tell him the future. Surprisingly, Animal doesn’t see his situation as a problem; he embraces it. This is depicted when the French nun takes him to the doctor, and he asks the doctors about the possibility of walking on two legs rather than mentioning the voices. At that momment, he meets and speaks to Kha-in-the-jar. Are the voices Animal is hearing real or is he suffering from a mental illness? To what extent do these voices influence Animal’s actions?

Another significant theme of the novel is justice. The novel is not only the first book where the victims are not victims of a biological disease but a chemical one, but we are, also, informed of the group that is responsible for the cause of this plague. We know who is to blame for the cause of this story that Animal narrates; it is the Kampani factory and its workers. All the people of Khaufpur want justice. Zafar is the leader of their hope for justice. He is battling an on-going case of eighteen years in the courts against the Kampani group. Zafar is the symbol of hope for the people of Khaufpur. They trust that under his guidance, they will be compensated for the effects that they have lived with from that night. However, Zafar knows that the Kampani group has more power, connections and resources on their side but he still keeps his thoughts positive. He says,

“Friends, the Kampani sitting in Amrika has everything on its side, money powerful friends and the government and military, expensive lawyers, political masseurs, public relations men. We people have nothing, many of us haven’t an untorn shirt to wear, many of us go hungry, we have no money for lawyer and PR, we have no influential friends… The Kampani and its friends seek to wear us down with a long fight, but they don’t understand us, they’ve never come up against people like us before… having nothing means we have nothing to lose. So you see, armed with the power of nothing we are invincible, we are bound to win.” (54)

Ma Franci on the other hand does not believe that the cause of the night was the Kampani factory. She believes that it was the hand of god. She says, “this is his work, he’s up and running again, this time there’ll be no stopping him.” Animal thinks that Ma Franci is crazy to think that god would have this happen to his people. But Animal also does not like this god figure that Ma Franci refers to because he is always silent. Ma Franci thinks that the end of the world had begun that night but Animal tells us, “Sanjo was wrong. F****** world didn’t end. It’s still suffering” (64). Is it fair for the people of Khaufpur to suffer like this? What can be done to reduce the effects of the aftermath of the poisoning that occurred on that night?

The ideas about  identity, languages and voices, and justice are discussed throughout the novel. They all influence the actions of individuals and their beliefs regarding the cause of the chemical incident. We hope that we have provided interesting questions to discuss. Hope you guys enjoy the reading and the post!

p.s. We found an interesting video about the novel!

(Can you embed this again pls professor? Thank you. :)) 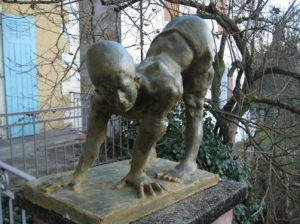 ← Together: A Documentary about AIDS in China
Take a break and enjoy these different book covers :) →