After our previous discussion regarding the new constitution that had been introduced to the community in the school by Ding Yuejin and Jia Genzhu, I thought it was fitting to provide some background information regarding the role of ancestors in Chinese culture, seeing as some of the rules – namely rules 2 and 3 – concern themselves with the humiliation and shaming of ancestors.

Just as a refresher, here are the specifics of rules 2 and 3:

#2. All government donations of grain, rice, cooking oil and medicine will be administered by the school. Anyone who gets greedy or takes more than their share can go f*** their ancestors, and may all their descendants die of the fever.

#3. Jia Genzhu and Ding Yuejin will be in charge of distributing coffins donated by the government, whenever we get them. Anyone who doesn’t follow orders will not receive a coffin, plus we will tell the whole village to go f*** that person’s ancestors and curse their descendants.

So what is the significance of ancestor worshiping in Chinese culture?

Ancestor worshiping has played an integral role in Chinese culture for centuries, so much so that these veneration practices have been incorporated into Taoist and Buddhist practices. It is the means through which the living honour the deeds, memories and sacrifices of the deceased, and it offers a way in which family continuity can be maintained, even in the afterlife. Ancestor worshiping also allows for the reverence of the wisdom of elders, and it seems to unify not only familial units, but also the society as a whole. Ancestors are given somewhat of a Godly status, and many believe that they are ‘guardian angels’ that watch over and protect the living.

The worshipping process begins during the funeral and mourning phase, and is continuous from thereon in. The rituals are as follows:

It can be understood why Genzhu and Yuejin use this tactic of shaming ancestors as a means to exercise control over the community within the school, which is made up of individuals who have such a high regard for their ancestors, that the mere thought of bringing their memory to shame is enough to coerce them into submission to the appalling new constitutional rules.

It’s easy to observe the culture of death in China through Dream of Ding Village. Everything from the hanging of scrolls on the door of the dead’s house, to posthumous marriage is explored through the narrative.

The first encounter the reader has with the death culture is the grieving process and reactions that different families have as seen on page 14. Then, the first mention of coffins and the carpenters appears. “The three elderly village carpenters worked all day long building coffins. Two of them came down with backaches from overwork.” (pg 14). In this video an assortion of pictures and videos shows how much of a back pain traditional coffin making really is!

The importance given to the coffins, especially by Ding Hui, is inmense. The wood used for the coffins, the engravings and what they represent, and what is put inside the coffin all has to do with the belief of the afterlife and giving the deceased all they need to prosper there. 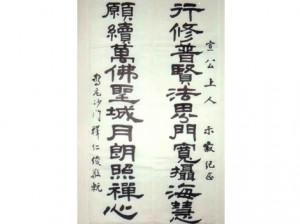 There are many different types of couplets, including marriage couplets, longevity couplets, greeting couplet and funeral couplet. To read up more on the funeral scrolls and chinese couplets in general click here.

Posthumous marriage plays a big role in the final part of the book. Ding Hui is making a huge profit off of this business, and we can note how ambitious he is when he marries his son to a girl much older than him, with a crippled leg and epilepsy. He does this only because her father is a very powerful man.

“Over the last two weeks, they’ve been digging up the bodies of our girls who died of the fever, and marrying them off to dead boys in other villages. They’re selling our girls, digging up their bones and giving them to outsiders.” (pg 292)

This is actually still going on in rural parts of China, as can be seen in this BBC News article  published just last week and on this article on the South China Morning Post.

← AIDS in China and not only
“A hundred thousand suns, burning up the sky.” →