“The “little tragedies” contain a number of scenes that are so intensely dramatic that they demand to be seen and heard, rather than merely read” (Anderson, 6).

From our reading aloud of Pushkin’s A Feast During the Plague it became clear that the play is chock-full of emotion, ranging from love to guilt to horror. In the introduction to The Little Tragedies, Anderson puts forth the importance of experiencing the play rather than reading it in one’s own head. The words of the characters must be given a voice if we want to even begin to understand them. I did a bit of research and found some dramatic recreations of the play, old and new. I’ll highlight some of the ones that stood out:

All four of The Little Tragedies have been made into one act operas by Russian composers. A Feast During the Plague was set into opera by Cesar Cui and gives the spotlight to three characters, Mary, Walsingham, and the priest, similar to the focus given to them by Pushkin. Walsingham’s song is referred to as “confronting death with a fine bravado” while Mary sings “with gentle resignation”. Finally the priest “gravely intones his admonition” of the revelers feast. The opera is fairly long, and in Russian, but skip through it to get a sense of the different musical representations of the three main characters.

Next, in the late 1980s Yuri Lyubimov, a Russian stage actor and director, put on his own version of A Feast in Time of Plague. Among other significant changes, the play opens with A Feast and uses it as a framing device. The play is more like The Decameron whereas the revelers sit around and “tell” one another the remaining three little tragedies. The main characters from each of the little tragedies become the revelers at the feast, allowing for their own little tragedies to cumulate to the biggest tragedy of all- the plague and imminent death. Kinda cool right? For more on Lyubimov and his play check out this book by Birgit Beumers.

Back to music: Three out of the four plays have songs that are to be performed by at least one character. The two songs in A Feast are as important than the actual dialogue of the play as they serve to develop Mary and Walsingham and provide insight into how they react to death. The “Theatre Collection” acted out their own version of Mary and Walsingham’s songs, both of which prove to be very different. Mary’s is more of a melodramatic a capella lullaby, while Walsingham aggressively strums an acoustic guitar, shouts, and gets the other revelers to cheer with him.

Check out the trailer and more promo photos of the rendition here. 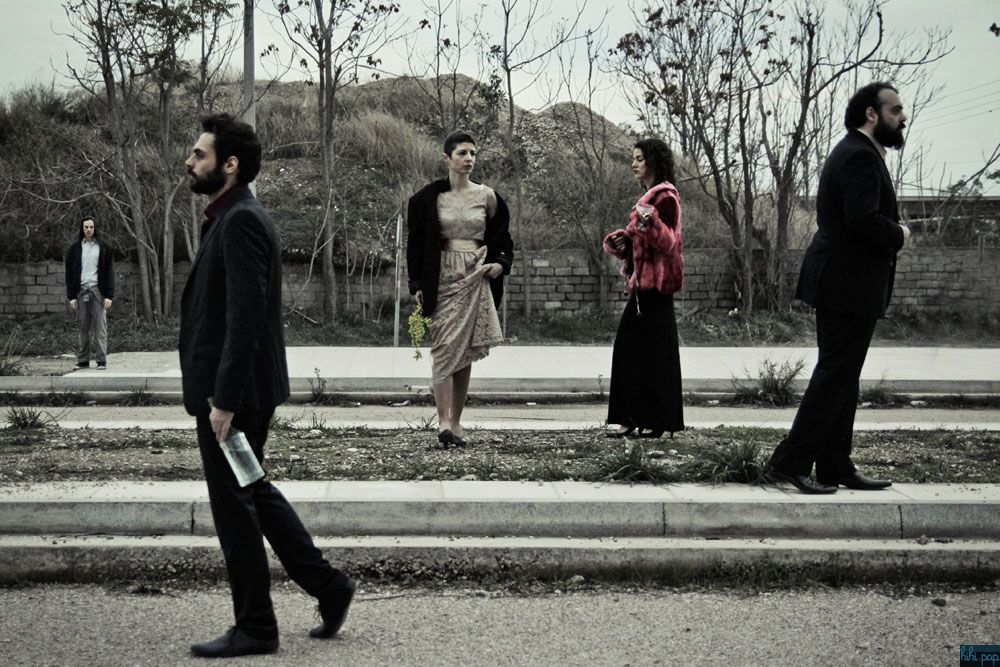 ← “Life is not a spectacle or a feast; it is a predicament.” -George Santayana
Chaos Syndrome: A Systemic Reason for Madness? →