Here is a brief animated visual, made by the publisher Knopf, to introduce Marcus’s novel. Very cool, although a little bizarre and disturbing. Ever since we started reading The Flame Alphabet, I was curious as to how one would frame the idea of a language toxin with a visual medium, like film. One of the central ironies of Marcus’s book is the fact that written language is used to convey an epidemic of poisonous speech. If The Flame Alphabet‘s plot were instead embodied in a feature-length film, would the effect be any more powerful? Seems like it could offer an interesting premise for a future project or modern art piece.

“And they were killed with their own names. From the Psalms. Beware your name, for it is the first venom. Revelations.”

I was intruguied as to where these came from, what was the exact scriptual reference and context. So I looked it up. Nothing but references to Flame Alphabet appeared in a google search, so I looked in the online Bible. And what a twist when I found out…these references don’t even exist!! Nada! I tried with only key words like kill and name, even used synonyms like poison instead of venom, changed the version from NIV to KJV (different Bible versions), and there was nowhere where there is any such grouping of those or similar words anywhere in any single sentance that vaguely resembled the lines above.

Then I remembered: Sam (the narrator) is Jewish! It might be in the Torah!

Then it hit me that not only is the Bible’s Old Testament all in the Torah anyway, Revelations, in the New Testament of the Bible, isn’t in the Torah, so Sam must have been referring to books in the Bible.

But Sam’s Jewish! Why would he know exact Biblical scriptures (even if they are fake)? Not that that matters, it’s not like he’s not allowed to read a Bible. But then, why would he (Sam) quote fake references? Why would Marcus make fake scripture, especially when so much relevant real scripture exists?

For example: James 3:8 NIV “but no human being can tame the tongue. It is a restless evil, full of deadly poison” or even better (and from a book he actually mentions) Revelation 6:8 NIV “It’s rider was named Death…they were given power over a fourth of the earth, to kill by sword, famine and plague…” IT EVEN USES PLAGUE!

So that’s a curious choice.

It is a good thing that Ben Marcus is visiting the university in a few days, as his novel The Flame Alphabet demands far more questions, often hidden away in metaphorical events, than it does answers.

The beginning especially is shrouded in questions – why would parents leave a daughter they loved? Why are Jews especially infected? And then, who is Murphy and what does he do?

We begin the novel to find Sam and his wife Claire readying to leave their daughter, Esther. Esther is a sharp-tongued teenager who constantly retorts to her parents’ questioning. In many ways her character and relationship with her parents appears normal for a teenager; she wants freedom, she talks back to her parents. Yet, Esther is a much darker, more cynical teenager than most. She is extremely mature, or maybe seems to be because she is so cynical. Sam, Claire and Esther play word games together where Sam tries to lure his daughter into conversation through baiting her: “we fell into the old cajole. We prodded, she resisted, we sulked and put our irreverent feelings in the air, and Esther suddenly, after we had cursed the whole transaction and felt disgusted by the topic, got talkative” (37). The parents’ love is apparent and imprisons them in the unhealthy situation: “sh** on me, oh my children, and I will never fail to love you?” (12).

Simultaneously, words and speech are coming under attack from a disease that is spreading through the population. The nature and effects of the disease are slowly unpacked as Sam, the narrator, details the lead-up to their departure. He loves his daughter but it seems that it is for that reason he also must leave her. From an isolated radio outpost where Jewish sermons are projected through a transistor radio, Sam and Claire are told that experts have identified “children as the culprit” (30). The disease has left both Sam and Claire ill, though when Esther leaves for a horse-riding camp, they seem to recover, or at least feel as if they have recovered ever so slightly. They refer to the days she is gone as “days without exposure” (23). Unfortunately, these days are not beneficial in the long-run.

The Flame Alphabet plays on ideas of communication and silence. There is lack of communication between medical services and the population, between parent and child, and between neighbours in society (for example at the picnic site). Although Sam and the reader are given snippets of the medical discussions of the contagion, it is through Sam’s narration and his own analysis that the cause of the contagion is uncovered. Does the reader gain a greater connection to the narrator, or a better understanding of the feelings of sufferers by this unveiling through the narration? Even the emergency sirens have been replaced by white noise, a distorted silence, “a plague of deafness” (9). As mentioned, there is a lack of communication between teenage daughter and parents, which one could consider natural but for Esther’s scathing remarks to her parents. Though, silence is also a part of Sam and Claire’s life – at home: “We cooked in silence. This was us at our best, stew building, salad making…” (33); and in religion: “feeding Rabbi Burke’s services to his dispersed, silent community” (41). As the reader, do you feel a greater sense of tension through this contrast of silence and deadly sound?

I think it is important to address the idea that it is children and children’s voices that are the source of contagion. It makes it more scary – anyone remember those Doctor Who episodes with creepy children!? Finally, communication and company has broken down between neighbour: “we tried not to trouble our few neighbours in the field by staring” (29). The simple act of saying “Hello” or sharing a glance has become burdened with intrusion. The illness affects people visibly, noticeable although quite subtle, and now neighbours begin to avoid one another. I believe this isolates the families more and makes the issue of one’s only child being the contagion of greater significance. If your child was making you ill, do you think you could ready your bags as Sam and Claire do? 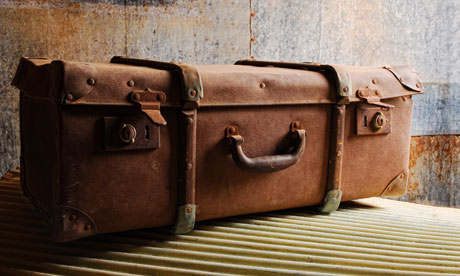 FUN FACT: The squiggles on the spine of the book are the first three letters of the Hebrew alphabet, “laid flat” if you like.

“In 1998, Li became the governor of Henan, one of the most populous provinces in China, which was also one of the areas most devastated by HIV/AIDS. During his stint, there were criticisms related to an HIV/AIDS outbreak linked to local blood banks. State-run media attributed the disease’s spread to“illegal blood sales and contaminated blood transfusions.” The central government began tightening controls over the business in the mid-1990s once more was known about HIV and how the virus is spread.”