From today’s class discussion on Welcome to Our Hillbrow, we identified a number of themes that emerge in the text, such as xenophobia in South Africa and the issue of cultural identity. Another important aspect of the novel is euphemism and metaphor, of which soccer (a.k.a. football) is a notable example. 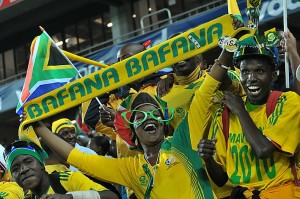 In both the novel and reality, football plays a major role in South African culture, as it brings a common sense of pride to the nation and it represents the best (and worst) aspects of the contemporary South African society. Interestingly, the narrator mentions soccer in the first sentence of the text: “If you were still alive, Refentše, child of Tiragalong, you would be glad that Bafana Bafana lost to France in the 1998 Soccer World Cup fiasco” (1). For the South Africans, soccer is the only event in which they “momentarily [forget] xenophobia” (27), as it serves as a platform for fans to unite in support for Bafana Bafana  – “The Boys”.

However, soccer is not merely a sport. It reflects its society, much like how theatre and fictional writing reflect reality. The passive act of watching soccer is unfortunately similar to the common act of spectatorship in society. For instance, in the following passage, the citizens of Hillbrow witness a 7-year-old girl die from a reckless car driver:

“Most people, after the momentary stunned silence of witnessing the sour fruits of soccer victory, resumed their singing. Shosholoza … sounded its melodies from Wolmarans Street, at the fringe of the Johannesburg downtown, to the head of Clarendon Place, at the boundary of the serene Parktown suburb. Shosholoza … drowned the choking sobs of the deceased child’s mother” (2).

An unfortunate consequence of a soccer victory is the unnecessary celebratory violence that follows, which is evident from the above passage. However, what is even more unfortunate is the reaction of society to this violence. Like spectators watching soccer, society is detached from the action and from the foul play of violence, and respond accordingly.

Soccer also serves as a metaphor for other “social disease”, as the narrator uses soccer terms to describe Terror’s, a rapist’s, malicious thoughts and intentions toward Refentše’s love: “Because he was full of spite towards you, Terror wanted to take Lerato’s thighs for a playing field, in which his penis would be player, referee and spectator simultaneously” (65).

In terms of the issue of xenophobia, though soccer temporarily distracts the Hillbrowans from their hatred of foreigners, it actually makes xenophobia more noticeable since its absence highlights the fact that it is usually present. In reality, South African football also highlights the issue of xenophobia, which can be seen in this article and this account of soccer’s history in Africa.

It is often said that soccer is truly an international sport. Why is soccer such a popular sport, in both the novel and in reality? Why is soccer such an effective means of analyzing society? What are the implications of this metaphor, and how else does soccer reflect society?

P.S. On a side note, this article discusses the recent murder of South Africa’s national soccer captain and its implications. (Take note of the article’s mention of Ebola.) Again, what is the role of soccer in highlighting current societal issues? How does the victim’s identity as a soccer player in this case add to the severity of the murder?

← He died, poor chap; of what precisely, no one knew
Law and Disorder →