When one of the visiting ‘jarnalises’ who come to do their annual ‘Khaufpur story’ leaves Animal with a voice recorder and asks him to record his story, the first thing Animal does is to sell the recorder. Nonetheless, Animal has to find another ‘recorder’ when later on he finds out that he does indeed have something to say about his life, the people he knows, and the aftermath of the Bhopal catastrophe.

It would be fair to say that the population of Khaufpur have so little and have had so much taken away, that they are instinctively skeptical of anything offered for free. Even a clinic, opened up by someone who “left a big job in Amrika out of pity for the people of Khafpour” – so when Elli Barber comes to Khaufpur and opens a free clinic in the poorest part of the town, suspicions are raised whether she is actually working in some sort of a secret enterprise with the bosses of the ‘Kampani‘ who are on trial.

While the author’s severely anti-industrialistic, anti-American and to some extent, anti-neoimperialist tone is heard as a continuous echo throughout the whole book, his using of fiercely humorously coarse and risqué stylistical language, putting it rather mildly, is perchance very much aimed at the reader, making him/her understand not the politically flamboyant long-term manifestations of Sinha, but rather immediate sufferings as well as down-to-earth basic needs of affected Bhopalis to this very day. As a matter of fact, Sinha is painstakingly straightforward with his sublimated-into-a-book cause; one, for instance, may easily spot the political message within the difference between the initial American (on the left) and European (correspondingly on the right) book cover versions: 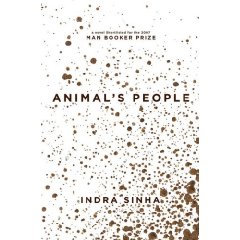 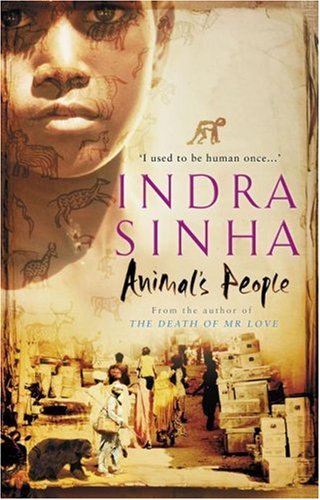 What led the narrator to Zafar and the political issues around “Kampani,” however, was not his cause for justice, but his lust and sexual desires. While the center of the plot is fixed around what happened “that day,” a big part of the text is filled with the narrator’s fantasizing about sex and Nisha, showing us not only his natural desire for sex, but also his desire to be human. Sinha touches the issue through the eyes of a 19-year-old boy named Animal who walks on arms and legs, which could at once be sad because he is the victim of the incident, and revealing, for the issue is seen at a totally different perspective. It is an interesting parallel between the progress of Kampani case in the court, and the narrator’s realization of his own identity as human. While he still endorses his name Animal, there are things he strongly desire as human.

Communication is also an interesting theme Sinha touches on. Because of his posture and his inability to read or write, the narrator initially has a serious problem communicating with people, nor did he want to interact with others. The narrator’s only companion was his dog, until Nisha approaches him and for the first time in his life, actually treats him as an equal and teaches him the ways of communicating. A lot of the characters throughout the novel, in addition to Animal, have their own problems in communication. The narrator’s careperson, Ma Franci, does not have anyone to talk to, since she lost her language skills “that day,” and the only language she speaks is French. The exchange between the American doctor, Ma Franci, and the narrator makes the readers wonder if language is the only issue in communication in this novel. The lack of language skills as well as disinterest in others lead to serious misunderstanding in communication.

What makes this story so fascinating is that Khaufpur doesn’t even exist in reality. So intricately explained and mapped out with such familiarity, this realisation elucidates the reason that no name is given to the Kampani. This extrication thus means that this is NOT a story about Bhopalis, but about Khaufpuris, and in particular, one Khaufpuri who goes by the name Animal. In this way, it is similar to Dream of Ding Village and different from Welcome to Our Hillbrow, but more than that, he uses the disaster that happened ‘that night’ to contextualise his story of human ambition, love, animosity, trust and lack thereof in a society of abysmal poverty – one that could exist anywhere yet nowhere else. While knowledge and understanding about the Bhopali Disaster can help provide some context that could provide some of the visual imagery Animal is saddened he can’t provide, Sinha’s creation of an alternate yet extremely realistic reality allows it such that this is a story that can be fully appreciated for its full worth even without such knowledge. As such, the focus is placed upon the life of Animal and his fascinating adventures, lusts, struggles, and fascinatingly creative and brutally honest narrative voice. Hence the author’s intent isn’t to tackle the ‘big picture’ questions of imperialism and industrialisation, but rather to let a story be heard; a story of calamity and sadness and a society wrenched at the core, one of powerplay, bureaucracy, and corruption, but also one of unity, love, respect, justice, and altruism. And horny lust in copious quantities.

It is also a story about good intentions coming at cross purposes with each other, and how chronic physical contamination can plague ones mind, perception, and belief in others. The widespread chemical catastrophe ‘erased thousands’ of lives and continues to make living impossible for so many, but its effect is more than polluting the water, but also their trust, their belief in humanity, and eradicates all semblance of hope. 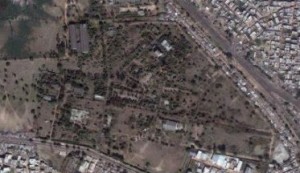 ← Review of Dream of Ding Village
Bhopal – the real-life Khaufpur →