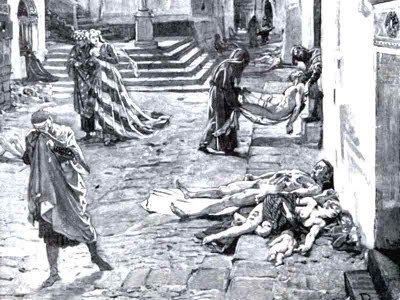 As he pushes toward the conclusion of his narrative, H.F. reiterates his view that the plague is caused by personal contact with the infected:

Here also I ought to leave a further remark for the use of posterity, concerning the manner of people’s infecting one another; namely, that it was not the sick people only from whom the plague was immediately received by others that were sound, but the well. To explain myself: by the sick people I mean those who were known to be sick, had taken their beds, had been under cure, or had swellings and tumours upon them, and the like; these everybody could beware of; they were either in their beds or in such condition as could not be concealed.

By the well I mean such as had received the contagion, and had it really upon them, and in their blood, yet did not show the consequences of it in their countenances: nay, even were not sensible of it themselves, as many were not for several days. These breathed death in every place, and upon everybody who came near them; nay, their very clothes retained the infection, their hands would infect the things they touched, especially if they were warm and sweaty, and they were generally apt to sweat too. (150-51)

It’s worth noting that Defoe’s narrator is taking a hard medical line here, as he has elsewhere (see also 64 and 85, for instance), as a contagionist. That is, even though he often describes the plague as beyond human understanding, he’s pretty sure he knows how it’s being transmitted, and he doesn’t think it’s just somehow magically floating in the air (see 152). He’s rejecting an alternate theory to the person-to-person contagion model, that people contract the fever from polluted air, not from direct contact with the infected. Nor does he think the plague is simply an act of God without natural means attached, though he comes close to taking that position, also in the conclusion (191).

Among the other things this novel does, then, is make a medical argument about the origins and transmission of the plague. The literary critic Barbara Fass Leavy, whose 1992 book To Blight with Plague has been useful to me as I’ve prepared to teach this course, suggests that both theories — the contagionist view and the miasmatic view — are “morally charged. Miasma has to do with a world of widespread material corruption, and as such is easily translatable into a metaphor for the antithesis of civic virtue, which assumes the possibility for society to be organized for the well-being of its citizens.” Leavy argues further that “The idea of direct contagion serves [Defoe’s] purposes better than miasma” because it presents a more dramatic situation for his narrator, who believes contact with the sick is what spreads the disease, yet chooses to remain in the infected city. Thus his dilemma isn’t simply avoiding polluted urban areas, but having to negotiate contact with fellow human beings who may or may not be carrying seeds of infection in their very breath. And he has to do so without seeming to advocate what he calls “a Turkish predestinarianism.”

How do you understand the connection between H.F.’s beliefs and his actions, as he recounts them, in the face of the plague? And how might this question be related to this book’s place in the history of the novel as a genre? We’ll take up these questions on Tuesday.

P.S. Of course both the contagionist and the miasmatic positions were wrong. Bubonic plague was transmitted by fleas like the one pictured above.