Integral to Colson Whitehead’s Zone One is the idea of the “American Phoenix”; the hope that the United States will emerge from the ashes of catastrophe and return to its former state of “glory”. The survivors’ attempts at rebuilding start with the transformation of Manhattan into an inhabitable area (Zone One; the first to come of a reclaimed country).

“Giving in to that pandemic of pheenie optimism that was inescapable nowadays and made it hard to breathe, a contagion in it’s own right.” (p. 16); thus the idea of rebuilding has become an anchor to sanity for the people of the USA. It is also important to note that the urge to rebuild is described as a contagion of its own.

The symbolism of the phoenix is particularly apt given that the neutralized living dead are incinerated and their ashes surround the living’s stronghold in Wonton; the living’s strife for reconstruction and return to normality takes place amidst the ashes of those who used to belong to their society.

Regarding the disposal of zombies and its relation with the American hope for reconstruction, it-s almost essential to analyze the following quote: “It was always disquieting to see empty pavement where you’d dumped some terminated skels. It was as if they’d just walked away.” (p. 93) This statement suggests that the dead keep standing up after getting killed, coming again and again in never-ending nightmare, and hinting at the unlikeliness of overcoming the dead and reestablishing the previous order.

Can the survivors actually build a society that is exactly the same as the one pre-apocalypse? Is it better to reinstate a central government or allow survivors to duel in anarchy, fending themselves against the dead and the thieving, more unpredictable living? Does the failure of governmental institutions and other sources of authority in our previous readings helps us answer this question?

Mark Spitz’s job is to “sweep” the area of “stragglers”: a minority of the living dead that are frozen in time doing a single action. Instead of the traditional brain-munching, limping human carcasses we, as readers, are more accustomed to, Whitehead plays with the idea of the zombie, instead depicting them as those who are destined to repeat the same action for eternity. The “stragglers” also come as a surprise to the characters in the book, who do not understand what causes some to become “skels” and others to become “stragglers”.

“Their lives had been an interminable loop of repeated gestures; now their existences were winnowed to this discrete and eternal moment.” (p. 62)

The comparison between zombies and humans is reinforced with the idea of these “stragglers”. It is seen in the novel that the stragglers are referred to as having gender:

“Mark Spitz had noticed on numerous occasions that while the regular skels got referred to as it, the stragglers were awarded male and female pronouns, and he wondered what that meant.”

By humanizing the stragglers, Whitehead is suggesting that the people of modern American society are nothing but zombies, caught in “interminable loop(s)”.

Is the straggler’s tendency to follow loops in behavior the result of capitalistic society or a comment on human nature and the necessity for routine and monotony? Is monotony related to the impression of having a purpose in life 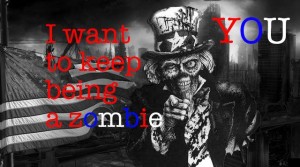 The narrator introduces the concept of PASD (Post Apocalyptic Stress Disorder). PASD manifests itself in different ways for different people. The inconsistency of symptoms emphasizes the individuality of characters.

The notion of individuality runs throughout the novel as a contrast to the idea that, prior to the outbreak, people were but zombies, entrapped in the machinery of capitalism, lacking individuality in the sense that they were all destined to go through monotonous lives.

In what way does this variation of symptoms between individuals resemble “the bug” in Black Hole? To what extent? Since the plague brought variation to an otherwise monotonous lifestyle, can we consider the disease as a blessing in disguise, as we had discussed for Dream of Ding Village?

← Surviving Adolescence 101
The Evolution of Zombies in Literature →