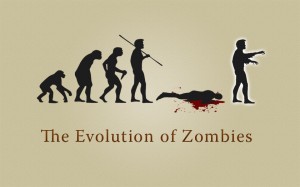 On Sunday we discussed the ideas of ‘zombies’ in the texts we have read and compared them to that in Colson Whitehead’s Zone One. We arrived at the conclusion that in previous works, the notion of The Zombie – though never explicitly mentioned – alluded to the idea of an infected being wilfully infecting another. However, given that Whitehead’s novel is based primarily on the subject of zombies, this definition does not lend itself as simply to the storyline, considering that we encounter elements of the zombie on many different levels – from that of ‘skels’ and ‘stragglers’ to the idea of the pre-apocalyptic world being trapped in a perpetual zombie-like state. Considering how the definition/ the use of zombies change depending on the work and the time in which it was written, I think it is necessary to look at a timeline of the major representations of zombies in literature.

1.The Epic of Giglamesh (dating back to 1000BC): recounts the struggle between the hero, Giglamesh, and the Gods, as he embarks on journeys and that displease and angers them. In the 6th (of 12) tablet, there is the suggestion of a zombie when the Goddess Ishtar claims that she will attempt to raise the dead who in turn will outnumber and outlive the living by devouring them.

2. The Bible (!): There is reference to zombies in the Bible itself:

Ezekiel 37:10: So I prophesised as I had been told. Breath entered the bodies and they came to life and stood up. There were enough of them to form an army.”

Revelation 11:11: “After three and a half days, a life-giving breath came from God and entered them and they stood up; and all who them were terrified.”

3. The Revenant: A zombie figure established in the Middle Ages. These zombies would return from the dead in a skeletal human form, to avenge wrong that was done by them when they were living.

4. Mary Shelley’s Frankenstein (1818): Although not a zombie novel, it dwells upon the notion of a character that is a walking, murderous corpse, with his only distinction from the modern day zombie being his ability to think and speak as the living do.

5. H.P. Lovecroft’s Herbert West – Reanimator (1922): define what we now understand as a zombie. The novel recounts the life of a mad scientist named Herbert West who endeavours to reanimate corpses, creating violent and primal beings.

6. The ‘Romero Zombie’:  Godfather of the modern zombie George Romero (horror writer and director), defined the zombie that we know of today – walking, mindless, dead, decomposing figures with the intention to devour the living. Romero introduced the idea of the zombie apocalypse – that there was absolutely no escape from these predators. His production Dawn of the Dead is the first to elaborate upon the effects on the world after the apocalypse, where the living struggle to survive and the zombies (the un-dead) outnumber their prey.

7. Today: In literature today, much like Whitehead’s Zone One, the notion of zombies is used to allude to apocalyptic fear; the fear for the safety of the world; the fear that humans – once infected – have the ability to inflict this chaos, and harm each other.

← The Zombies, Ourselves
Zombie Apocalypse →