A Feast During the Plague is one of three of Alexander Pushkin’s plays [published?] during his lifetime. This play is particularly iconic as its origins and inspirations are very different from his other plays. As explained in The Little Tragedies, Pushkin derived some inspiration for this play from his visit to the Caucasus where he witnessed the outbreak of the plague in Erzum, Armenia. Pushkin’s tragedy, which takes place in the 19th century, is about a man who is having a feast when the entire city is dying of Cholera. Pushkin, however, writes this about the plague not merely as a means of reflecting on his personal experiences, but the idea of “plague” in this play offers a deeper metaphorical symbolism. Throughout the play, Pushkin forces his audience to grapple with the questions:

“What is the response of an individual to a catastrophe that has enveloped the community as a whole but he or she has so far escaped? Is it possible to save oneself by turning one’s back on the doomed community, or does one’s own humanity demand solidarity with other human beings even in their agony? And what bond — if any — remains between the saved and the lost? The living and the dead?

The feast and the members in attendance, according to Pushkin, represent a microcosm of the larger society. Pushkin, therefore uses this small society to draw the audience’s attention to the relationship between the living and the dead. He therefore uses this setting to pose the following questions: To what extent do the revelers at the feast act as a true microcosm of the larger society? We believe that the revelers expose only a small faction of society. However, their thoughts and experiences reflected in the play demonstrate that like the victims of the plague in Defoe’s A Journal of the Plague Year, the experience of a plague or catastrophe forces the individual to switch his/her already established convictions from the idealized belief in the glorified society, to the glorification of the individual self.

SIDE NOTE: *How is Mr. Walsingham represented at the feast? Does he truly embody the character of a chairman seated at the helm of affairs, or does he stand in a representative for the audience watching the play?

The idea of hosting a “feast” during a plague was to celebrate that most of Mr. Walsingham’s group is still alive; that’s why they shouldn’t grieve over their dead friend and they should drink to the fact that they are still alive, and for the memory of their dead friend, Jackson. The Feast symbolizes the consumption of lives, the toast itself symbolizes life though they are actually toasting for a loss of life. Their act of enjoying what is left of life overrides their emotions of grief to the loss of a friend. They were feasting in the street, while a cart that is weighted down with the bodies passes by. Were they ignoring the fact that the disease is contagious or were they just accepting that death is inevitable? The Chairman started the feast by Mary singing a sad song. Mary’s song compares the church before and during the plague by saying it was “full of folk,” and “the steeple bell would sound.” However, during plague the church became “mute and empty,” “like a burned, abandoned homestead”  (Pushkin, 96-97). This leaves us with a question: Why did people stop going to the church during the plague? Was it to avoid gathering because the disease is contagion?

In The Mask of the Red Death, by Edgar Allan Poe, Prince Prospero, the main character, decided to isolate thousands of people from higher classes in an abbey to protect them from a contagious disease called the Red Death. In A Feast During the Plague, the group was also celebrating during a plague but they weren’t trying to protect themselves from the plague. The group seems to accept the inevitability of death because they are feasting, while a cart that is weighted down with bodies passes by.

In A Feast During the Plague, one of the most touching moments is Mary’s song. The operatic account depicts the horrors and struggles of the wretched plague, whilst also following the doomed relationship between two lovers of this time. The final two lines of her hymn–

“All is still — the graves alone

Thrive and toll the bell”

–illustrate the binary contrast between the context. There was both happiness and horror. Pushkin’s purpose of the libretto was to emphasize the benefit of living in the middle rather on two binary extremes. This binary motif is illustrated from the title itself “A Feast” being held during the “Plague” a time of repulse. Although Mary’s hymn is important in its illustration, it is essential to emphasize the contrast by Walsingham, which contains a different note. Nevertheless, the binary does portray rather in appealing features after a while, allowing the reader to become comfortable with living a middle-class life. This was important during Pushkin’s time at the turn of the 20th century, as many changes were taking place in Russia, and the importance of the middle class was not as apparent with the traditional folklore or stories of royalty. To conclude, Mary’s song holds an important role in the libretto by emphasizing a binary contrast of the context, and the extremes that many should avoid. 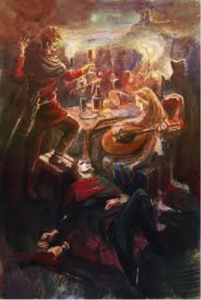 Interestingly, the translator of the play, Nancy K. Anderson, calls the young man’s proposal to toast for Jackson, a dead member of the feast, a form of “ugly egotism”, that he, as a member of a community, only displays caring for the ones closest to him and not necessarily the entire society. And Nancy points that his egotism roots from the deepest fear that the young man has of his possibly imminent death. Yet, isn’t it justified for him to put his life first ahead of others’ in such situation? This poses a question on the effect of a plague on a society: if it seems that the human egotism to preserve their own selves is natural, is the crumbling of society, as commonly found in literary works that present plague, inevitable in the face of disasters?

In The King Oidipous and Journal of a Plague Year, there are agencies — Oidipous in the former and the government of London in the latter — that seem to be responsible for efforts in putting an end to the plague and preventing the communities from falling apart. It appears that the cure for the plague comes from these agencies: Oidipous being assassinated and the government exercising the policy of shutting up houses of the infected. Yet in Pushkin’s play, these agencies are ostensibly absent, and this absence is perhaps why the people channel their frustration for a seemingly endless plague by having the feast. We may say that Mr. Walsingham holds the authority in the microcosm he creates at the feast table, yet even his proposed solution is that of ignoring the reality rather than confronting it. When he is criticized by the priest for initiating the feast, he shows his unstable stance on the approach towards the plague. The absence of scapegoat to yell at (like Oidipous) or government to turn to is what fuels the chaos rather prominent in the play. Everyone is caught up in their inner conflicts, and the audience, who may or may not have experienced a plague creeping into their cities, can feel this. Like Mr. Walsingham, who is left with his own thoughts after the priest leaves, this play, leaves us, too, in contemplation.

← Everyday is like Sunday
A Feast: Remixed, Recreated, and Reimagined →