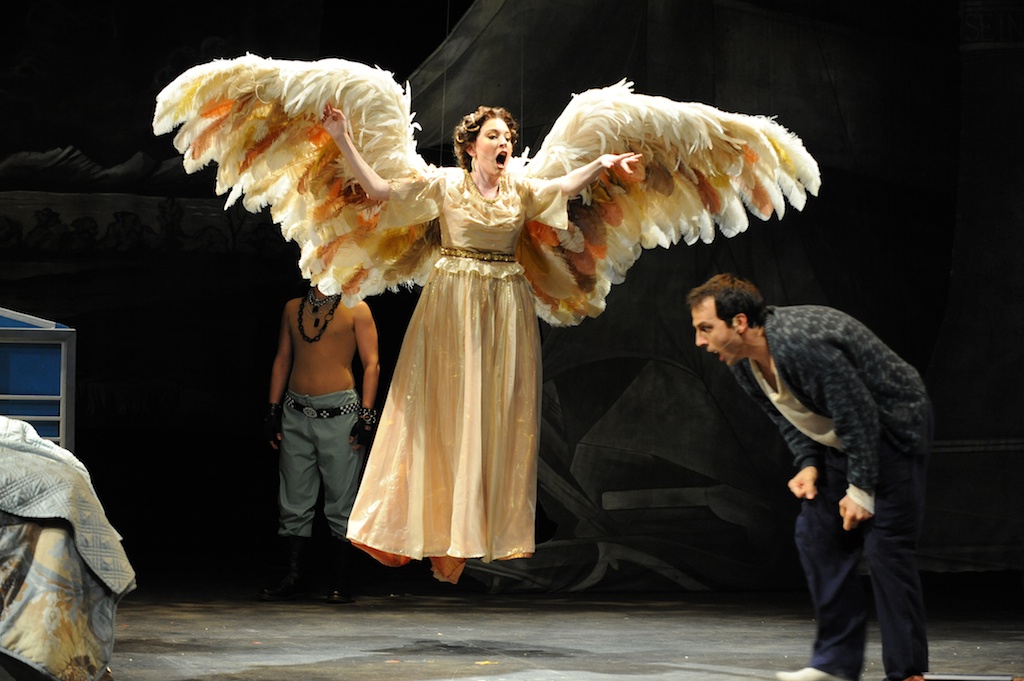 Consider this an augmenter’s post of my own: I wanted to organize some links to material I’ve used and written over many years of teaching Kushner’s play. For a decade before we both moved to Abu Dhabi, Cyrus Patell and I taught a course on the Square called Writing New York, for which we amassed a pretty substantial number of blog posts about Kushner and Angels. I’ve written a little about it elsewhere too. I hope some of this proves useful as you continue to wrap your heads around the play in a short amount of time this week. Here are a few of the highlights; if you have limited time, please pay closest attention to the first two items linked in the next paragraph.

For WNY I would deliver two lectures on the play, one situating it in a discussion of time/history/imagination (and thoughts on the play as a period piece set in the Reagan era) and one that highlights some of the cultural building blocks Kushner recycles in the play (Mormonism, Judaism, Marxism) by way of a discussion of the play’s several angels and angelic precedents. We’ll touch on some of that as we wrap up our discussion of the play. On the WNY course site, which is slightly inactive now that we’re no longer teaching our course, I’ve offered my thoughts about the play’s conclusion, in which Prior breaks the fourth wall and blesses his audience, and earlier I’d written about the ways in which the play recycles a number of stories and symbols, Central Park’s Bethesda Fountain among them. (Because that post has some links that are now dead, I had to post again on the prior use of Bethesda in Godspell.) Several years ago, a highlight of our course was a guided tour of Central Park at sunset (or a tour of the sunset with Central Park as a backdrop) with our favorite ex-NYC tour guide, Speed Levitch. I provided a more detailed account of that afternoon elsewhere. It’s only indirectly related to Kushner’s play, but still important if you want to think about the ways in which Central Park has long been contested public space, something Kushner’s certainly aware of when he selects Bethesda as the setting for his final scene. Here are a few links re: his use of Roy Cohn as a character. And here are some thoughts on the play’s place in the history of Broadway theater.

Cyrus has also offered thoughts on the play, which he has taught at NYUAD in his Cosmopolitan Imagination course. One year he supplemented my lectures with a few additional thoughts on Kushner’s use of New York City as a setting. But he’s written most extensively on the play’s engagement with cosmopolitanism (see this one, too, and this one).

Remember that you can always search “Angels in America” on this site and see what past Contagion courses have come up with: there’s a lot of great material from conveners and augmenters. And If you really want to get hardcore, here’s a live-tweet from the last time I lectured on this play at NYUNY in 2011:

If you’re really interested, here’s the archive of a live-tweet one of our TAs ran as I lectured in 2011, the last time we taught this course together.

Whew! That should keep even the most ardent Kushner fan busy for a while. See you soon.

← AIDS & Word Choice
Why did Kushner write this play? →