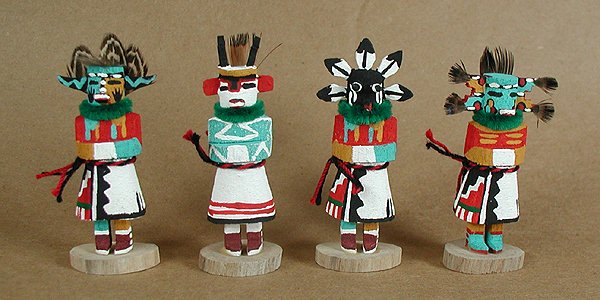 I’m still thinking about the appearance of Native American kachina dolls late in Black Hole. This morning I ventured a few thoughts off the cuff about how they invoke several relevant issues: ritual, rites of passage, community, parent/child relations, and perhaps a healing counterpoint to the fragmented Kewpie dolls strung up in the trees around The Pit/Planet Xeno in the woods.

Here are some notes I use when I lecture on Zuni origin myth in my typical American Literature survey. This is a summary of a text called “Talk of the First Beginning.” Its basic outline is shared by other Pueblo tribes’ origin stories:

Sun Father passes on his daily journey. He’s lonely. So he sends two sons, the warrior twins, to find someone to pray to him and keep him company. They go into the fourth womb of the earth. (Consider how literal this description of “Mother Earth” is.) What do they find? A group of amphibian-like people, living in utter chaos and darkness. They’re not pleasant: one of the warrior brothers lights a fire, sees an ugly fellow, and says “Poor thing! Put out the light.” The rest of the narrative is spent trying to get these creatures to the earth’s surface so they can worship Sun Father, followed by their journey to “the middle” place, which is called Zuni or Itiwana. It turns out that these creatures, which in some contexts are referred to as “raw” will eventually become the Zuni people, once they’ve become “cooked” by their exposure to the sun. So this text contains a movement from disorder and chaos—mudheads shitting and pissing on themselves in the dark—to order and ritual.

What happens next? Eventually the people move upward through three subterranean worlds or wombs, each associated with different colors, minerals, animals, plants, etc., before some—but not all—of the people finally emerge through a cavern into the sunlight and begin their journey toward a homeland.

What happens when they come into the sun? They have to confront their appearances and lack of identities. They encounter Spider Woman, who is the mother of Sun Father. She designates the first sun priest, the old man of the Dogwood clan, to guide the people.

Various things happen on their journey to the middle place, most of which help establish order, the rules by which their culture will operate: Coyote, who is always a trickster figure, gives them corn in exchange for mortality. An unnamed boy and his sister violate the incest taboo and revert to their slimy primordial state. Some of the children who fall in a magical river sink to the bottom and become kachinas. There’s a murder scenario that seeks to establish the rules of taking human life. They play a ball game as part of a contest for daylight and to establish the length of days. The warrior twins battle a giant and lead the people past ghosts. They divide into different clans and encounter other tribes. A water bug helps them establish the horizon, and finally they arrive at Itiwana, the middle, which translates as “The Middle Ant-Hill of the World.”

What I find useful here is the way in which this origin story is also a journey (which may echo the passage of Native Americans’ ancestors across the Bering Strait and down into what is now the American southwest) and also a series of transitions by which the people (uncooked mudheads) become the People (the Zuni). That movement may be paralleled by Keith and Eliza’s journey south toward Monument Valley and toward adulthood. We’ve already commented on their resemblance to other origin stories, namely Adam and Eve.

As I mentioned this morning, the kachina also invoke a process of disenchantment associated, especially in Hopi culture (another Pueblo tribe), with adolescents’ entry into the Kachina Society and, thereby, into a mature tribal membership. Is there a similar movement in Black Hole? Or does the lack of any meaningful adult relations with these teenagers preclude it? The account of the Hopi disenchantment ritual I gave this morning relied heavily on an essay I read when I was your age that has stuck with me lo these many years. I dug around a little this afternoon and found a scan of it online. Don’t feel pressured to read it for class, but if you’re interested in this tangent, here you go: