From the very first sentences of reading the Pale Horse, Pale Rider (1939) the author, Anne Porter, grabs our attention by getting insight of the novel’s protagonist, Miranda. If I didn’t know that the novel was a fiction, I would assume that we are reading a real person’s notebook: the emotions, feelings, experiences of being sick are described so vividly that it is impossible that the author of the book did not experience it personally.

An American writer Katherine Anne Porter is the first female writer that we read so far in our class who wrote about the disease, and its aftermath. It is an amazing contrast to the male writers of her generation who I tend to associate more with “war writing” and all of the noble ideas attached to war. The horror of the World War I is not at all the same here – I suppose I had believed all people who lived through the Great War felt noble and destroyed about it, but Porter presents a much more cynical attitude. The author keeps a restrained tone in her writing most of the time, but there are moments of pathos and power, especially when we get into the mind of the protagonist.

Miranda is a young woman, who works for a newspaper during the last year of the WWI when the tragic flu epidemic killed millions. She is alive, but not living. She dines and dances with a soldier she loves, but knows that the relationship is pointless as he is being shipped overseas in a few days. Then Miranda herself catches the illness, and her suffering is narrated through several bizarre and horrific dreams: “…She floated into the darkness, holding his hand, in sleep that was not sleep…and angry dangerous wood full of inhuman concealed voices singing sharply like the whine of arrows…” (191, Porter). Although on the verge of death, Miranda has a “beatific vision” that alienates her from life itself. If we look at the biography of the author, we may assume that Porter describes her own near-death experience with the virulent flu virus:

“In 1915, Anne Porter was diagnosed with tuberculosis and spent the following two years in sanatoria, where she decided to become a writer… Katherine almost died in Denver during the 1918 flu pandemic. When she was discharged from the hospital months later, she was frail and completely bald. When her hair finally grew back, it was white, and remained that color for the rest of her life. Her experiences during treatment provided the background for her long story Pale Horse, Pale Rider.” 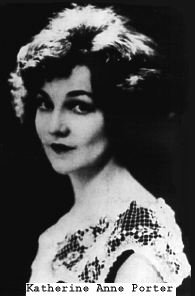 Based on the quote above, we can conclude that Anne Porter conveyed her own inner feelings during the disease through her fictional character –Miranda.