Following the recent trend of unusual narration in our studied texts, Sinha’s Animal’s People depicts the story of the fictional, poor city of Khaufpur, India following a poisonous chemical leakage, all of which is narrated through the taped voice of the protagonist, Animal. Interestingly, the protagonist himself is an unconventional character, as he repeatedly claims, “Je suis un animal” (40). 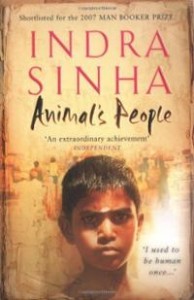 The protagonist endures his name and status as a devastating effect of the “Kampani’s” chemical leakage. As one of the survivors from the catastrophe, Animal experiences the toxic effects of the poisonous chemicals six years after the explosion, when his spine becomes deformed and forces him to walk on all fours, like a dog. The change in his physical form also causes him to change in his attitude towards others and himself. The relationship he has with his name provides insight to his character. Although he adamantly demands to be called “Animal,” he does not allow people to treat him as inferior. Rather, he stands his ground, which is displayed in the way he protects himself as a response to the attempts to tease him. Animal seems to be torn between the two worlds: human and primitive. This is reflected in the following passage:

““My name is Animal,” I say. “I’m not a fucking human being, I’ve no wish to be one.” This was my mantra, what I told everyone. Never did I mention my yearning to walk upright. It was the start of that long argument between Zafar and me about what was an animal and what it meant to be human” (23).

It almost seems as though Animal has to convince himself that he does not want to be viewed as a human. This behavior goes hand in hand with the jealousy he felt for everything that was able to walk, paralleled with his desire to be able to walk upright. Animal also succumbs to primitive, instinctive desires, and often justifies his decisions by reassuring himself that he is not human (87). Thus, before he meets Nisha and Zafar, he lives on the street performing elaborate scams until he agrees to work as a spy for Zafar. Even so, Animal’s success as an information scouter is mostly due to his ability to extract meaning from people’s unspoken thoughts and feelings, as well as through unfamiliar words. His subhuman (or arguably, superhuman) ability to read others and communicate with both people and animals (like his dog, Jara) suggests he is neither fully human nor beast, but is living in limbo between the two categories.

What does it mean to be human? What is the distinction between humans and animals? How does Animal’s instinctive perception of the world reflect his more-than-human nature? What does the title, Animal’s People, suggest about the division between man and beast?

The oral nature of the narration enhances Animal’s animalistic characteristics, as some of the words are transcribed with incorrect spelling, such as when he agrees to spy for Zafar and says, “Namispond! Jamispond!” (26) (translation: the name’s Bond, James Bond). Also, the text is embedded with sounds and words from various languages, including “Inglis” (English), Hindi, and French. The rapid switching between languages, which can often be confusing, contributes to the authenticity of the book. The mixture of dialects and sounds reflects the rough language of animals, an idea that is highlighted by Ma Franci’s inability to understand other languages after the poisonous chemical leak:

“On that night all sorts of people lost all kinds of things, lives for sure, families, friends, health, jobs, in some cases their wits. This poor woman, Ma Franci, lost all knowledge of Hindi. She’d gone to sleep knowing it as well as any Khaufpuri, was woken in the middle of the night by a wind full of poison and prophesying angels. … But there was a further twist to Ma Franci’s madness, when she heard people talking in Hindi or Inglis, or come to that in Urdu, Tamil, Oriya, or any other tongue used in Khaufpur, she could no longer recognize that what they were speaking was a language, she thought they were just making stupid grunts and sounds” (37).

How is language/speech related to being human? How does language work as a distinction between people, and between humans and animals? What aspects of a language reflect the people who speak it, and how do we perceive people who speak a foreign language (compare with Arthur Mervyn)? What is the significance of language in terms of delivering a story, particularly Animal’s?

Aside from language, the question of sexuality and lust arise as other aspects of being alive and being human. Although Animal constantly dehumanizes himself, he develops feelings for Nisha even though he knows he has no chance with her. Despite his inner voices of reason, his love and desire for her grow to such an extent that he is willing to do anything to impress her and take care of her (47).  Also, when he spies on the “Amrikan” (American) woman, Elli, who moves to Khaufpur and prepares to open up a free medical clinic, he accidentally sees her bathing – the first time he sees a woman naked. He involuntarily lusts for her, which causes him to dream about his desires and his beloved Nisha:

“Often I’d dream of making love with I won’t say her name. I never told anyone because if people got to know, what would they do, laugh at me, pity me? “Animal, don’t have those kind of hopes.” … Animal mating with human female, it’s unnatural, but I’ve no choice but to be unnatural. Many times I would dream that she and I were in love, sometimes we were married and naked together like in the movies having sex. In such dreams was my back straight? Did I stand upright? No and no. I was exactly as I am now and it did not matter. Such dreams! I woke from them shaking with hope. This frightened me, I despise hope” (78).

Time and time again, Animal reacts to Nisha and Elli with uncontrollable lust. In tape nine, Animal sits in between Nisha and Zafar at the town meeting to discuss the opening of Elli’s clinic, and the physical presence of Nisha causes “the monster down there [to stir]” (124). He struggles to hide and subdue “the unruly beast” which “immediately starts to rear and buck, damn that f***ing thing, it has no respect.” Thus, Animal’s lust is itself given animal-like characteristics, which further complicates the definition of the human essence. The fact that he is able to differentiate love from lust reminds us of his more ‘human’ side.

Is love a human characteristic, or is it a natural instinct? If lust, love, and jealousy, and hope are all aspects of being human, what does this indicate about human nature? How does this answer the bigger question on what it means to be human?

Since in this novel, the disease is entirely caused by man-made means, it offers a new insight into the issue of responsibility in the face of an epidemic. Moreover, it allows for an analysis of the inherent problems behind the disease, much like how Dream of Ding Village introduced the question of the role of government vs. individuals in the propagation of and response to the spread of AIDS. As explained by Animal’s narration, the employees and managers of the “Kampani” are accused guilty in the aftermath of the factory leak, but for eighteen years, they never make an appearance in court (52). In fact, they also fail to pay the costs for the recovery efforts and for the victims of the leakage, placing the Kampani’s selfish needs before the poor citizens of Khaufpur (112). Khaufpur’s own government fails to respond appropriately to the catastrophe, as minimal action is taken by the (ironically named) Minister of Poison to alleviate the victims’ suffering (131).

What is the role of the government in Animal’s People, and how does its (in)action compare with the Chinese government in Yan’s Dream of Ding Village? In what ways is the government criticized and satirized by the Khaufpuris? What is the significance of politics and business within the context of this novel? How does the issue of politics relate to the issue of foreigners vs. insiders, in terms of the “Amrikan” presence in and influence on the town?

Hopefully this post and the questions posed above help us to begin delving into the complex fabric of this fascinating text. Happy reading!

← “A hundred thousand suns, burning up the sky.”
Discussion about Ebola →