A New York Times article about AIDS activist Gao Yaojie; she has been advocating for Chinese authorities to address China’s AIDS crisis, and as a result had been put under house arrest multiple times between 2003 and 2007 to prevent her from receiving international awards for her work. 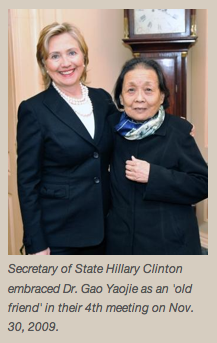 “But for a Communist Party intolerant of public dissent, embracing grass-roots AIDS activists is a different matter. They often complain loudest about inadequate care and official corruption. And few people have complained louder, or with more influence, than Dr. Gao, who gained fame for helping expose the tainted blood-selling operations that spread H.I.V., the virus that causes AIDS, in central China in the 1990s.”

‘“Luckily I am still clear in the mind, or I could have been fooled by the government into speaking for them, telling untrue tales,” she said. “It does not matter to me at all whether I can go pick up the award.

“I think my absence at the ceremony will be more influential than me being there.”’