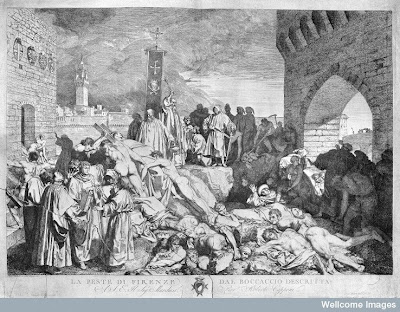 In addition to continuing with our discussion of Sophocles today we’ll likely turn the corner to a consideration of the frame narrative and First Day of Boccaccio’s Decameron: a quick leap over a thousand-plus years in time.

What remains consistent between or at least similar in the plague frameworks for these works? That’s one question we’ll ask. But I’m struck by generic differences as well, especially the shift from theater to novella. The Decameron is about storytelling, and the effects of storytelling, to be sure, but it’s also about reading stories about storytelling. Note that Boccaccio directly addresses a female reading public at the outset. This invocation — and the predominance of female characters — will give us a good inroad to discuss the role of gender and gendered bodies in the selections you’ve read.

A couple quick resources that may be useful to you: The best Boccaccio site I know of is the Decameron Web, a long-standing project of Brown University’s Italian Studies Department and Virtual Humanities Lab. In particular, pages devoted to the plague and to various literary contexts, medieval to postmodern, should be relevant to our discussions. Note the page devoted specifically to the narrative frame, which will take up much of our brief consideration of this work.

That material can be glossed quickly at your leisure. If you’d like a more specific and intensive engagement with recent criticism on The Decameron, you might want to look at recent special “Italian Issues” of the literary journal MLN. (You can view these search results from a secure NYU connection; almost all of the Italian issues have something re: Boccaccio.) Of special interest to us: Irene Albers, of the Freie Universität Berlin, writes about the specifically medical relationship between storytelling and the body in Boccaccio’s text. A few key excerpts should suggest why this would be an important topic for our consideration. She starts by focusing on two familiar approaches to the frame narrative: parallels between plague and other disorders (here, specifically, lovesickness), and the narrator’s claim that by beginning with the descriptions of plague, the pleasures brought by the hundred stories to follow will be heightened by contrast:

The analogy between Plague and lovesickness is also based on the fact that the emotions in Boccaccio’s work, according to premodern theories of emotion, are external instances and entities which “overcome” and “seize” the subject. They are not the result of “elezione,” but of the “appetito,” which does not obey the will.31 This is reflected by the use of common metaphors from the realm of nature, like the fire metaphors that often appear in passive constructions: “essendo acceso stato d’altissimo e nobile amore” (3); “in fiero furore accesa” (189); “dello amor di lui mi s’accese un fuoco nell’anima” (893); “di subita ira acceso.”32 In other cases, the passivity of the subjects is shown by verbs like “venire” and “cadere”: “ed andando gli venne un pensier molto pauroso nell’animo”; “cadde in un crudel pensiero” (165). The analogy between lovesickness and plague corresponds to the doubling of the frame: if the narrator in the “Proemio” offers his book to the women as a medicine for lovesickness and “malinconia,”33 the [End Page 34] “therapeutic fiction”34 of the frame means that the storytelling can offer protection from the Plague. Accordingly, one cannot understand the novellas as mere diversion from the catastrophe of the disease.

The final sentences there deserve our consideration in class this week: If we’re asking what purposes the plague frameworks serve, we have to ask whether storytelling here is merely a form of diversion from the plague’s devastation or if something bigger is at work. Albers argues that the characters themselves understand storytelling to have physiological, and potentially curative, effects on their bodies:

It is not in the novellas alone that characters react bodily and emotionally to what they see and hear. Such situations are also formed in the frame narrative, in the commentary following the individual novellas, in which the reactions of the brigata are conspicuously portrayed as bodily. This first occurs among the narrators: in the introduction to the tenth novella of the first day, Pampinea says that when a person wants to use storytelling to cause others to blush, he often ends up blushing himself.83 The same applies when one tells of others’ tears, “raccontar l’altrui lagrime” (354), the words with which Fiammetta announces the Ghismonda novella. The narrator of a novella also becomes moved himself—in rhetoric, this is a well-known requisite for the successful transfer of emotion to the audience.84 The occurrence of such a transfer is demonstrated by the many references to the audience’s blushing (63, 247, 560), sighing (392, 185), crying (159, 366, 763), “compassione” (159, 392, 418, 738), and above all, their at times uncontrollable and boisterous laughter (48, 71, 100, 142, 185, 479, 556, 575, 593, 644, 674, 681, 702, 710, 763, 802, 817, 842, 843). Often, multiple reactions occur simultaneously. After the Masetto novella (III.1) some of the women blush while the others laugh: “Essendo la [End Page 50] fine venuta della novella di Filostrato, della quale erano alcuna volta un poco le donne arrossate e alcuna altra se n’avean riso, piacque alla reina che Pampinea novellando seguisse” (247). Or the women blush first, only to break into laughter: “La novella da Dioneo raccontata prima con un poco di vergogna punse i cuori delle donne ascoltanti e con onesto rossore nel loro viso apparito ne diede segno; e poi quella, l’una l’altra guardando, appena del rider potendosi abstenere, soghignando ascoltarono” (63, cf. 560). The narrator of the Decameron apparently finds it important that speaking about passion and hearing novellas have direct bodily effects, causing, according to the medical assumptions of the epoch, either the expansion (in laughter) or the contraction (in weeping or sighing) of the heart. The humors are set into a motion that “cleans” the subject, or frees him from harmful emotions and humors.85

Is The Decameron holding up an early model for a talking cure? Let’s spend more time today and Thursday talking about the bodies in and the implied audiences for this week’s texts.

During our opening discussion of Oedipus the King — which centered primarily on the question of whether and how the plague in the play really matters to the remainder of the drama — I mentioned that one feature of writing about epidemic disorders from many times and places is a comparison between disease and breakdowns in language or communication. Epidemics are often accompanied by rumors — about their origins, effects, and remedies. This is certainly something to keep an eye out for as we move forward, paying close attention to variations on the theme as much as to its ubiquity.

I’d like us to pick up a similar topic when we resume on Tuesday: the question of plague as metaphor or allegory. Some readers of plague narratives assume that literary treatments of disorder or sickness are “merely” metaphorical — that a playwright or novelist is less interested in an actual medical crisis than he or she would be in using a plague setting to represent something like moral or political corruption. This assumption makes a certain amount of sense. Plays and novels, after all, are something other than a medical treatise, and accounting for the literariness of literary texts is very much something we’ll be interested in this semester. In the case of Oedipus, moreover, the characters seem to model for us a set of connections between plague and moral disorder: the solution to Thebes’ crisis, Oedipus echoes Apollo’s oracle, is to find Laius’s murderer and

By the end of the play, Oedipus seems to have internalized the city’s sickness, taken it on himself. The messenger declares that he’ll need assistance in his exile because the “sickness” is “more than he can bear” (l. 1429).

But a recent strain of criticism on the play recuperates some older efforts to take the plague context more seriously. After all, the assumption on scholars’ parts has long been that Sophocles introduced an epidemic as the setting for his version of the Oedipus myth because Athens had so recently suffered from plague (as recounted in the brief excerpt you’ve read from Thucydides). With mass deaths so fresh on their minds, these critics ask, wouldn’t Sophocles and his audience have understood the plague to be an actual fact of life rather than a literary symbol? If this set of questions interests you, I’d point you in the direction of this recent book by Robin Mitchell-Boyask, a classicist at Temple University in Philadelphia. You might also want to check out an even more recent article, written by a team at the University of Athens Medical School. It appeared this year in the journal Emerging Infectious Diseases, published by the Center for Disease Control in the United States, and “adopt[s] a critical approach to Oedipus Rex in analyzing the literary description of the disease, unraveling its clinical features” to conclude that “this epidemic was an actual event, possibly caused by Brucella abortus.”

I’d like us to consider the question of plague-as-metaphor when we pick up our discussion tomorrow. Do you see compelling reasons to side one way or another on the issue? Are both views valid? And how might this set of questions force us to think even more carefully about the relationship between sickness or medicine and language in general?