In Black Hole, the central characters are on the cusp of adulthood, prone to emotional turmoil and indecision. They make mistakes, and the consequences of those mistakes often seem gravely inescapable, like ‘the end of the world’. Chris makes the mistake of having unprotected sex with Rob, and once Chris realizes she has “the bug”, she feels profoundly isolated and ashamed. Then, when she gets caught cutting class and her parents become stricter and impose a curfew, Chris is completely overwhelmed. This small series of mistakes makes Chris feel like a complete failure with no hope of redemption. She runs away from home with Rob to escape the situation, and the note she leaves for her parents mentions plans to go to California even though Chris only moves into the nearby woods with the other “burnout, sick kids”. Does this tendency to spiral out of control instead of moving past mistakes make these adolescents more susceptible to disease? Do they themselves contribute to the devastating effects of the disease?

This book does not confront the disease’s origin the way many of our previously discussed literature does. The disease itself is otherworldly, and it has a similarly nebulous origin. No blame is placed on a specific group of people for spreading or bringing the disease. The disease seems to come from a void, perhaps extraterrestrial. The title references a phenomenon that exists in only outer space, and the people affected by the disease congregate around a place they call “Planet Xeno”. This place is buried in the woods, and the fact that so many characters take comfort in/seek natural spaces might be further evidence that the disease affects humans but originated from something distinctly inhuman.

Apart from its grotesque outward symptoms, the disease is very bizarre in that not a single person shares the same symptom with others. Rob has an additional mouth on his chest that utters strange sound and words against his will; Chris, although having contracted the disease from Rob, has a different symptom, her back and foot cut open. Eliza has a tail, and Keith discovers tadpole-like bumps around his ribs. The guys who hang out in the “pit,” secluded from the town due to their deformed appearance, all look hideous but in their own unique way.  At the end of the novel is a page from yearbook, where each student features unique symptom. 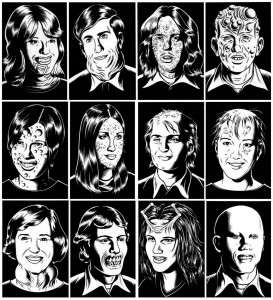 These symptoms have only one thing in common: mutation from what is considered “normal.” The disease that ostensibly distinguishes the ill from the sound degrades a popular, straight-A student into a social outcast.Why is it significant that the characters suffer from their own unique symptoms that make them socially isolated? Are these differences random, or does each mutation affect each character for specific reasons? What is Burns trying to convey by portraying a yearbook page in which everyone suffers from the disease, looking apparently different from one another? How can we relate it to the nature of adolescence?

Last but not least, It would be impossible to discuss Black Hole without bringing up its use of imagery. Images are often repeated and juxtaposed, acting as a method of foreshadowing or emphasizing the main theme of the novel: a black hole.

The novel begins with a puzzling account of a Biology class in which Keith looks into a dissected frog’s back:

“I was looking at a hole… a black hole and as I looked, the hole opened up.. and I could feel myself falling forward, tumbling down into nothingness”

With this are parallel images of a frog’s dissected back, the cut in Chris’s foot, Chris’s back, and a hand covering genitals. With the story of the frog’s back acting as a starting point of the novel, the other three “black holes” are further elaborated upon and explained as the novel progresses. Interestingly, these are all images that Keith directly witnesses during his own narrative. These images seem to foreshadow all the major relationships developed during the novel: Keith helped Chris when she cut her foot in the woods; Chris’s mutation was caused by her sexual relations to Rob; the hand over genitals is an image from Eliza and Keith’s affair. 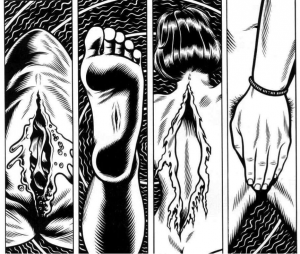 If all these are black holes, what message is the novel conveying? What is the significance of having a hand covering the genitals, as opposed to leaving it uncovered? What about the usage of a frog in particular?

Another recurring image is the black hole itself. In the very first black hole depicted in the Biology class scene, all the major images central to the novel’s plot are included: the snake, gun, tadpoles, the frog, bones, alcohol, drugs, water, etc. But why is Burns providing us with so many hints? It is remarkable to think that the whole novel was thoroughly thought out from the beginning. 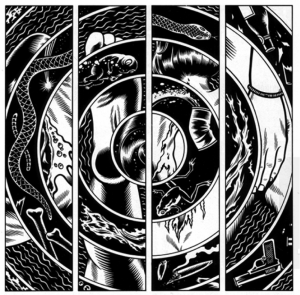 Looking forward to the discussion tomorrow,

← War on Three Fronts
Fear of the Dark →