The first thing you notice when you open Black Hole by Charles Burns are the “normal” faces of teenagers in a high school yearbook. The inside cover presents this novel as an “eerie portrait of the nature of high-school alienation itself”. If you flip to the end of the book, you see these portraits grotesquely disfigured and literally turned alien. Here we see, the term alien operating at different levels. There seems to be a literal transformation of people into aliens and a social alienation of characters within a high school drama.

Just to give some background context, Black Hole was presented as supposedly an autobiographical book. It took Burns 10 years to create Black Hole (1995-2005) and he published the story over time as twelve separate comic books. The graphic novel takes us into the lives of angsty and disaffected American teenagers from the 1970s. Using the woods as a hangout spot, these teens drink, do drugs, have sex. It is slowly revealed throughout the first half of the graphic novel that these teens are also transmitting, knowingly and unknowingly, a sexually transmitted disease which they refer to as “the bug”. This teen plague physically changes their bodies in different ways for everyone. All of the deformities experienced by the victims of the bug are different in their own way.  Is the bug a metaphor for some other disease? HIV/AIDS? The disease is strange in that it does not cause death or pain, only mutations: tails, or mouths where they don’t belong, or skin that moults, or webbed fingers . What do these strange growths represent? Why does it affect everyone differently? Are their deformities a portrayal of how they feel in the inside? These deformations cast each of the victims into social isolation. To what extent is this disease acting in the social realm vs. purely biological realm? It raises the question of how do we sympathize with the outsider?

The novel begins with a hole inside of a frog and Keith’s dream. We are then presented with a foreshadowing of three more types of holes that recur in the novel. 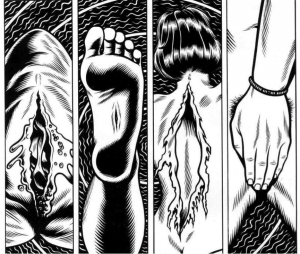 “I froze. I can’t explain what happened. It was like a deja vu trip or something…a premonition. I felt like I was looking into the future… and the future looked really messed up. I was looking at a hole…a black hole and as I looked, the hole opened up… and I could feel myself falling forward, tumbling down into nothingness. For a while I was just floating… I was in this totally black place, it was kind of spacey but it felt nice… nice and safe. Then it was like things started pushing into the blackness…voices, blurry shapes.”

The events are told in a non-linear fashion and the narration shifts between Chris and Keith. With no strict chronology, how and why does Burns play with time and memory throughout the novel? Keith refers to the dream as as a deja vu trip and a premonition. What is the significance of pairing these ideas: a feeling of nostalgia vs. a vision of the future?

Let’s take a look at the two main narrators: two typical high schoolers, Chris and Keith. The narration is constantly shifting between their points of view. Keith is in love with Chris, who doesn’t seem to notice him. Instead she has fallen in love with Rob and inadvertently got the bug from him. Once Chris contracts the bug she is socially isolated from her peers. She wanders through the woods and sheds her skin. What is the significance of this transformation? It is reminiscent of the scene in Angels in America, when Joe sheds his second skin, his Mormon undergarments at the beach. Burns is taking a typical teen angst drama and transforming it into a teen mutant story that visualizes and fantasizes their fears experiences into deformities. How does the bug heighten the social tensions and emotions like anxiety, insecurity, alienation that are common in drama of high school life?

A graphic novel like Black Hole presents the readers with beautiful and bizarre images and settings. How do the natural surroundings and the metaphysical dream worlds Burns illustrates work in the novel? Why do those infected with the bug alienate themselves from society and escape to the woods? Why does Planet Xeno exist? The beginning of each chapter, the two page picture spreads (called diptychs). The left picture is a single object, like a foot, a moon, or a broken bottle, set against a jet black background. The photo on the right shows one or more of the characters mimicking the geometry of the left. Throughout the novel the construction of one page almost always reflects the construction of the previous in some way. How does its black and white presentation add to the overall moody, gloomy, angsty, creepy dysfunctional tone of the graphic novel?

The following is an excerpt from an article written by Jonathan Rauch for the Atlantic about a political ‘disease’ in America that he has dubbed the ‘chaos syndrome’. It reminded me of the chaos prevalent in Pushkin’s play that the conveners’ discussed earlier and that time we talked about the similarities between a demagogue like Trump and Oedipus the King. It’s a contemporary example of how disease can be used as a metaphor for a breakdown in sociopolitical systems and relationships.  The parallels between the dysfunction in the current American (and perhaps global) political climate and in the fictional plagued societies we have been reading about are striking. Can you spot the common threads and themes running through them? Rauch suggests chaos syndrome leads us into positive feedback loops of self-destructive behavior antithetical to our shared commitment to the greater good. Could you say Walsingham and the revelers are in a similar predicament? Have you come across a treatment or cure for ‘chaos syndrome’? Also here’s link to a PBS News Hour Interview with Rauch.

“Trump, however, didn’t cause the chaos. The chaos caused Trump. What we are seeing is not a temporary spasm of chaos but a chaos syndrome.

Chaos syndrome is a chronic decline in the political system’s capacity for self-organization. It begins with the weakening of the institutions and brokers—political parties, career politicians, and congressional leaders and committees—that have historically held politicians accountable to one another and prevented everyone in the system from pursuing naked self-interest all the time. As these intermediaries’ influence fades, politicians, activists, and voters all become more individualistic and unaccountable. The system atomizes. Chaos becomes the new normal—both in campaigns and in the government itself.

Our intricate, informal system of political intermediation, which took many decades to build, did not commit suicide or die of old age; we reformed it to death. For decades, well-meaning political reformers have attacked intermediaries as corrupt, undemocratic, unnecessary, or (usually) all of the above. Americans have been busy demonizing and disempowering political professionals and parties, which is like spending decades abusing and attacking your own immune system. Eventually, you will get sick.The disorder has other causes, too: developments such as ideological polarization, the rise of social media, and the radicalization of the Republican base. But chaos syndrome compounds the effects of those developments, by impeding the task of organizing to counteract them. Insurgencies in presidential races and on Capitol Hill are nothing new, and they are not necessarily bad, as long as the governing process can accommodate them. Years before the Senate had to cope with Ted Cruz, it had to cope with Jesse Helms. The difference is that Cruz shut down the government, which Helms could not have done had he even imagined trying.
Like many disorders, chaos syndrome is self-reinforcing. It causes governmental dysfunction, which fuels public anger, which incites political disruption, which causes yet more governmental dysfunction. Reversing the spiral will require understanding it. Consider, then, the etiology of a political disease: the immune system that defended the body politic for two centuries; the gradual dismantling of that immune system; the emergence of pathogens capable of exploiting the new vulnerability; the symptoms of the disorder; and, finally, its prognosis and treatment.”