To be honest, I’m not a big fan of movies and I haven’t watched The Wizard of Oz or A Streetcar Named Desire to better understand this play. However, Prior’s makeup and lines in the clip that we watched in class on Monday did remind me of Norma Desmond, the main character in the old but famous movie Sunset Boulevard. Here are two pictures for you to visualize their similarity: 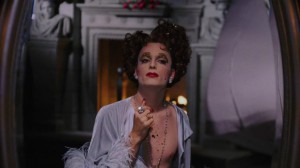 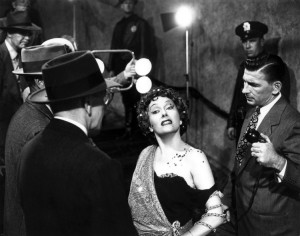 Sunset Boulevard is a 1950 American movie directed by Billy Wilder and won three academy awards at that time. In the movie, Joe Gill is a screenwriter who accidentally rushes into an old mansion and meets Norma Desmond, a forgotten silent film star. Norma Desmond is working on a script for a film in which she plans to be the main actor and she wants Joe’s help. After Joe starts to live with Norma, Norma falls in love with Joe but Joe refuses because he falls in love with Betty, another girl. Soon, Norma looses her hope to return to the stage because Paramount is clearly indifferent to her film script. At the same time, Joe plans to leave her so she kills Joe. In the end of the movie, Norma is detected as the murderer and her mansion is surrounded by police and reporters. When she steps out of her house, she dreams that she finally comes back to the stage and says “All right, Mr. DeMille, I’m ready for my close-up”. Here is the final part of the Sunset Boulevard:

Prior is similar to Norma in many ways. They are forgotten and abandoned by their lovers and society; they put on lots of makeup to hide their weakness; they both use hallucinations to soothe their pain or depression. Most importantly, they rely too much on hallucinations and dreams, so they may be confused between dreams and realities. Different from Louis, Prior suffers the most but he acts as a stronger figure though we can clearly see his struggle. As a “homo” with AIDS, Prior is definitely belittled and isolated by the mainstream conservative society. However, he wishes to be like Norma, who arrogantly and elegantly walks to the sunset of her dramatic life.

← The Summer they Executed the Rosenbergs
AIDS & Word Choice →