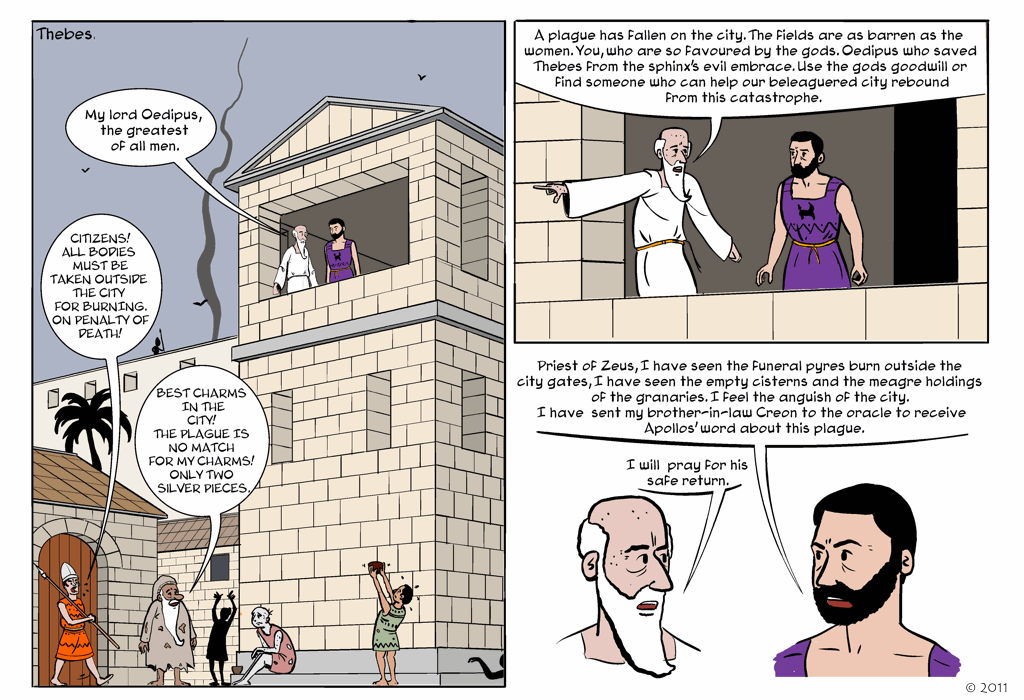 In a convener’s post for Oedipus the King I wrote for Contagion 2012, I mentioned a strain of recent scholarship on Sophocles’ play that takes the plague setting seriously:

After all, the assumption on scholars’ parts has long been that Sophocles introduced an epidemic as the setting for his version of the Oedipus myth because Athens had so recently suffered from plague (as recounted in the brief excerpt you’ve read from Thucydides). With mass deaths so fresh on their minds, these critics ask, wouldn’t Sophocles and his audience have understood the plague to be an actual fact of life rather than a literary symbol? If this set of questions interests you, I’d point you in the direction of this recent book by Robin Mitchell-Boyask, a classicist at Temple University in Philadelphia. You might also want to check out an even more recent article, written by a team at the University of Athens Medical School. It appeared this year in the journal Emerging Infectious Diseases, published by the Center for Disease Control in the United States, and “adopt[s] a critical approach to Oedipus Rex in analyzing the literary description of the disease, unraveling its clinical features” to conclude that “this epidemic was an actual event, possibly caused by Brucella abortus.”

As I noted in that post, part of the reason we read this play at the beginning of this course is to consider just how long the question of plague as metaphor has been around, but also to ask whether the literal and figurative registers are as separate or opposed as we commonly take them. Do you see compelling reasons to side one way or another on the issue? Are both views valid? And how might this set of questions force us to think even more carefully about the relationship between sickness or medicine and language in general?

As may be apparent by the juxtaposition on the syllabus of Sophocles’ play against Thucydides’ description of the Plague of Athens, we’ll be talking over the next little while about the significance of genre here. Sophocles is writing a play; Thucydides is writing a history. How does the plague figure into each? How does each author represent it? And how might each work help us consider further the question we raised during our initial discussion: whether it’s possible to write about disease in language that doesn’t trade in metaphor of some sort.

Image above taken from The Most Favoured by the Gods, a comics adaptation of Oedipus the King by Christopher Brawn.